Why Did I Write Do Ask, Do Tell, Let’s Talk? 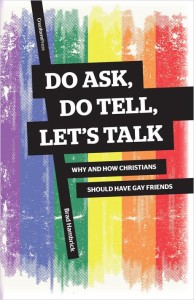 It might be more helpful, at least at first, to explain why I didn’t write Do Ask, Do Tell, Let’s Talk (which releases March 8th). I didn’t write this book because I believe homosexuality is the most important or pressing issue of our day. Actually, to the contrary, I wrote this book because it is my perception (accurate or not) that part of what complicates the subject is that only people who are very passionate about it have the courage-boldness-audacity (whatever you prefer to call it) to speak or write on it.

It’s my belief that someone needs to be part of the conversation who doesn’t feel as though history hinges on homosexuality. This is why in the opening chapter I try to be clear about my general perspective.

I do not consider homosexuality my “hill to die on” issue. I don’t believe the probability of experiencing the Third Great Awakening or whether America remains a geo-political superpower hinges on the moral-political issues surrounding homosexuality. Neither do I believe that gay rights as a cause is the logical extension of women’s suffrage or racial equality.

If your position on homosexuality is approximated in the paragraph above, you may be uncomfortable with this book. When the subject is framed in either of these ways, the answer becomes so immediately “obvious” that only an idiotic or evil person could disagree with you. Even if this is where you are, I hope you’ll keep reading.

There is a second reason I wrote this book: I was asked to—both directly and indirectly. This book was not on my radar until a friend came to me and said, “Would you be willing to write a book on how conservative Christians can have gay friends without compromising their own convictions? I think that kind of book is missing and it’s not something we handle effectively in the church. I think you have a tone in dealing with sensitive subjects that could navigate the topic well.”

My initial answer was, “Thank you for the encouragement, but I don’t think I’m passionate enough about the subject to write a book on it.” But the request was sticky and I began to listen a bit more closely to the debates in the Christian blogosphere. That is when I began to realize my non-passion for the subject might be an asset instead of a liability.

When I listened to the debates, my assessment (feel free to disagree) was that “conservatives” typically come across as if they have never cried with a friend who experiences same-sex attraction and wonders what this means, while “liberals” typically come across as if the only way for such a person to be authentic is to embrace a gay identity—that is, as if sexual attraction trumps every other aspect of personhood. I couldn’t imagine being someone who experiences same-sex attraction, would like some help thinking through that reality, but finds only these two polarized sources of guidance.

Then I began to reflect on the number of pastoral counseling conversations I’ve had with individuals who have experienced unwanted same-sex attraction. I thought about one of the primary sticking points in these conversations: the absence of authentic friendships in the context of which these individuals could 1) be fully known (honest about their struggle), and 2) be fully loved (without placing a strain on their Christian friendships), yet 3) without embracing a gay identity and joining the gay community.

Counseling can provide relief, but only community can offer hope. As I say in chapter two, “Counseling without friendship is like being stranded in the ocean and given a raft for one hour a week but asked to swim the other 167 hours.” In the absence of a church that understands, having a counselor who cares merely creates an impasse: there is hope (“God doesn’t hate me because I experience same-sex attraction”) but no clear direction (“I am still incredibly alone and the church doesn’t seem willing to help alleviate this significant part of my struggle”).

So I said yes and began the process of writing Do Ask, Do Tell, Let’s Talk. My enthusiasm for the value of the project has grown. But, honestly, I don’t look forward to the controversy it may bring. Who can write 100 pages on homosexuality and not upset some people? That grieves me. Not because I am thin-skinned and anxious about people not liking me, but because in the current climate “debating the topic” usually excludes the person who is struggling.

My greatest prayer for this book is that God would use it to equip the church to build bridges of friendship in order to care well for two groups: Christians who experience unwanted same-sex attraction, and non-believers who did not find the fulfillment they hoped in embracing a gay identity. When those conversations are being had in living rooms and coffee shops, maybe it could even change the tone of conversation on social platforms and debate panels.

Regardless of whether that latter, lofty objective is achieved, I will be elated if Do Ask, Do Tell, Let’s Talk results in same-sex attraction no longer feeling like a sentence of “solitary confinement” for individuals looking for hope and direction from the church—more specifically from individual Christian friends—in the midst of their experience of same-sex attraction.