Tamar Listens to Psalm 61: A Reflection on the Impact of Misused Spiritual Authority 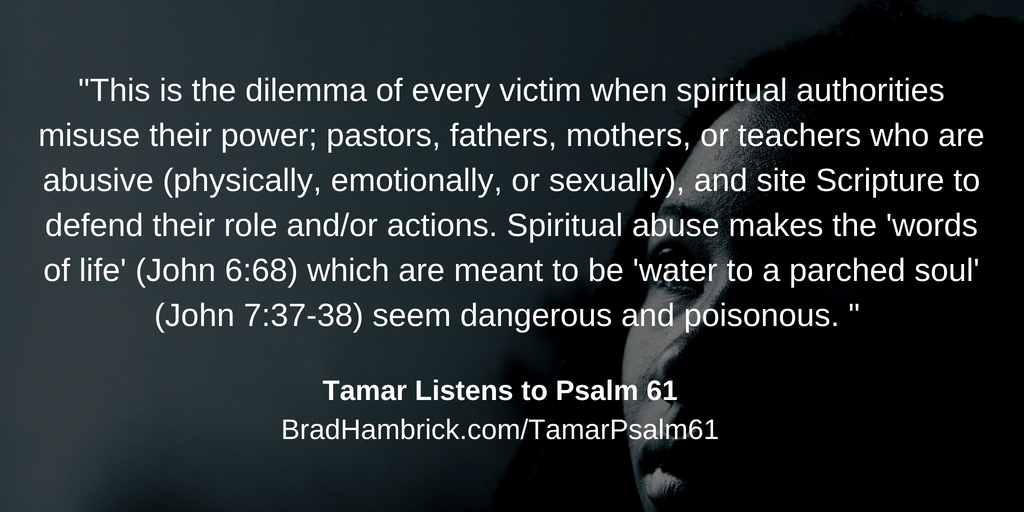 The context of Psalm 61 requires some explanation. Most scholars believe[1] Psalm was written while David was on the run for his life from his son Absalom (II Samuel 15:13-37). Absalom had killed his brother Amnon for raping their sister Tamar (II Samuel 13:1-33). Absalom killed Amnon after David, his father, did nothing to defend or seek justice for Tamar (II Samuel 13:37-39). When David did not seek justice for the murder of Amnon, Absalom saw his father as weak and began to lay the ground work for a coup (II Samuel 14:1-15:12). Again, even knowing of Absalom’s actions, David did nothing.

The purpose of this post is not to criticize David as a father, although there is ample evidence that there were significant deficits in this area of his life. The purpose of this post is to reflect on the experience of Tamar, who would have doubtlessly heard Psalm 61 sung in the temple as an account of David’s trials and God’s deliverance. But it will take us a moment to get to this point.

Pause: In light of this probable context, read Psalm 61. What are your impressions? What would your response be if you spoke with a father in David’s situation and this is how he summarized his situation?

To get to Tamar’s experience, we must examine David’s level of self-awareness and the desire of Israel to believe David’s account of history. In getting to know David, we realize that he was given to self-deception; notice how blind his heart was when he sexually assaulted Bathsheba in multiple ways (spying on her while bathing and sending messengers – palace guards – to bring her to him for sex; II Samuel 11:1-4) and subsequent follow up (resulting in him murdering Uriah, Bathsheba’s husband; II Samuel 11:14-17). It took a confrontation from the prophet Nathan to get him to acknowledge these sins and their effects (II Samuel 12:1-23).

Notice that all of the passages listed are five consecutive chapters in II Samuel. The author of II Samuel is tying these events together.

Notice also that David had sought no justice for Tamar as Deuteronomy 22:25-27 would require. This would have been David’s obligation as king. Furthermore, based on Absalom’s reaction, we are left to believe that David did not even punish Amnon as father. Then David’s passivity towards Amnon led to his threat from Absalom. The most striking aspect of David’s response is his indifference. When, as a king, David did nothing the people around him were powerless to act. Tamar was invisible and ignored. Tragedy follows. David’s spiritual and political authority made his indifference have graver consequences.

It was the threat of Absalom, not the rape by Amnon, which Tamar heard as the center of David’s prayer as he ran for his life. David makes himself the central character in this story. David is the victim, not Tamar. All of Israel is singing along. David is praying for his life and throne which are at risk because his actions (or inaction), not his daughter’s trauma and pain which were no fault of her own.

David again – just like with Bathsheba – doesn’t get it. How much does he not get it? David was praying about his “vows” to God, which he thinks he’s kept (v. 5), and asking God to be for him a rock, refuge, and strong tower (v. 2-4). The very things David had failed to be for Tamar as her father. This is the refrain that David was asking Israel to sing about him and subsequent kings for generations to come (v. 6-7). David thinks he is still being faithful to his “vows” as king as he writes the psalm (v. 8). Israel affirms this as they sing along.

Could you imagine being Tamar listening to this Psalm? I can imagine her crying out, “Where is Nathan to awaken my father’s conscience this time?”

I write this post with no sense of condescension towards David. David was “a man after God’s own heart” (I Samuel 13:14) but not a man who had arrived at God’s heart. There is no deceptiveness in David’s heart for which my heart is not capable (Jeremiah 17:9-11). That should humble us all.

We cannot emotionally distance ourselves from these kinds of atrocities. How often, in our day, when a great spiritual leader fails morally do we mourn their fall, pray for their restoration, and forget those affected by their actions? In the leaders’ pain, they invite us to mourn and pray as they experience the consequences of their actions as threats to their wellbeing.

But before we go further with our need for humility, let’s not leave Tamar’s experience behind. Too often, we leave the experience of the abused behind when we see something about ourselves that needs to change.

Too often, we leave the experience of the abused behind when we see something about ourselves that needs to change. Click To Tweet

Imagine what it would be like for Tamar to hear true words spoken, inspiring the masses, by the person who enabled and (unsuccessfully) protected her abuser. After all, this is a divinely inspired psalm that contains truth – we are to call out to God as our rock, refuge, and strong tower in our hours of need. How many times had David taught Tamar similar lessons during their family devotions? Just as we can be, David was right about God, but wrong about himself. How was Tamar to filter through this; what pieces of David’s fatherly instruction to her were good and right, and which were dangerous and toxic? Fresh and salt water weren’t supposed to come from the same well (James 3:11), but in David, they did. Did everyone who sang Psalm 61 believe David’s version of the story? After all, he was “their king and hero.”

This is the dilemma of every victim when spiritual authorities misuse their power; not just pastors, but Christian fathers, mothers, or teachers who are abusive (physically, emotionally, or sexually), and then site Scripture to defend their role and/or actions. Spiritual abuse makes the “words of life” (John 6:68) which are meant to be “water to a parched soul” (John 7:37-38) seem dangerous and poisonous. We should grieve deeply when this happens because God grieves deeply when this happens (Ezekiel 34:1-25).

Definition: For the purposes of this reflection, “spiritual abuse” is being defined as the use of biblical texts or themes to defend abusive behavior and violations of trust to silence / shame the victim for resisting or disclosing the authority figure’s sinful actions.

Let’s return to David. David is acutely relevant for the modern application of this reflection. It is our respect for David that makes us not want to see these things (again, assuming Psalm 61 was written as David fled Absalom). This is the same dynamic that often gives us a willful blindness, comparable to Israel as they sang Psalm 61, to such offenses in our day.

But God often shows us the great failures of his messengers: Abraham (saying his wife was his sister and putting her in sexual danger with Pharaoh, Genesis 13:10-20), Moses (being disqualified from ministry for pride and anger, Numbers 20:1-13), David (as sited above; II Samuel 11-15), and Peter (being hypocritical because of racial biases, Galatians 2:11-14).

We are prone to think that this perspective on Psalm 61 couldn’t be true because it’s in the Bible. Would God allow something so mixed-messaged and confused-motive to become part of Scripture? Wouldn’t that make the Bible less trustworthy and useful?

That is an understandable point of discomfort; one I’ve wrestled with as I’ve written this reflection. But if Scripture speaks to all that is required for life and godliness in a broken world (II Peter 1:3-5), then it must speak to these matters. These actions and the type of emotional turmoil they cause are too common to go unaddressed by God.

The Psalms are the place where God puts into words the most emotional dissonance. If God has chosen to minister through breakable vessels (II Corinthians 4:7-12), then God needs to model how to navigate the tensions that emerge when these vessels break. We should be more concerned if tensions like this didn’t exist in Scripture. This reflection is merely an attempt to interpret this psalm in its historical-and-relational context; allowing Tamar’s experience (the victim of the triggering event) to be at the forefront instead of David’s (in this case, the enabler facing the fallout of his inaction). Victims should not be in the background of the church’s view when leaders fail.

Victims should not be in the background of the church’s view when leaders fail. Click To Tweet

So what do we do with this reflection? Here are three, of what could be many, applications.

May the contemporary Tamars not feel isolated, unheard, and unprotected in our day. May they not become the forgotten side story when a story of a leader’s failure comes out.  May we choose to keep the afflicted, harmed, or vulnerable at the forefront of our care and concern, just as God does.

First, Psalm 61 may have been written while David was fleeing from Saul. If this is the case, then the reflection has no exegetical value. But can still help us understand common responses to abuse within communities of faith. As a counselor who has worked with abusers and victims, I have frequently heard the self-centered approach to repentance critiqued in this post even if David is not an example of it.

Second, we do not know when, in relation to the events above, Psalm 61 was written, and that would be relevant to this reflection. If Psalm 61 is written in the context of fleeing Absalom, I would assume it was written while David’s sense of personal threat was high; impeding his ability to think of the concerns of others (particularly Tamar). It is normal for repentance to be highly self-centered in the immediate aftermath of a crisis coming to light.