Prayer as Wrestling with a Friendly Father

Recently I was challenged to consider Colossians 4:12. This passage tells of Epaphras wrestling with God (another way to say “struggling on your behalf in prayer”) for the good of those he loves.

Colossians 4:12, “Epaphras, who is one of you, a servant of Christ Jesus, greets you, always struggling on your behalf in his prayers, that you may stand mature and fully assured in all the will of God.”

Initially, this terminology made me feel like I was trying to coerce something from God that He did not want to give to those I loved. But that doesn’t seem consistent with the tone of passages like:

Matthew 7:7-11, “Ask, and it will be given to you; seek, and you will find; knock, and it will be opened to you. For everyone who asks receives, and the one who seeks finds, and to the one who knocks it will be opened. Or which one of you, if his son asks him for bread, will give him a stone? Or if he asks for a fish, will give him a serpent? If you then, who are evil, know how to give good gifts to your children, how much more will your Father who is in heaven give good things to those who ask him!”

Then I thought of wrestling with my boys. This was one of their favorite activities when they were little. If I was in the floor, they were on my back. It was great fun. As we did this, two things happened. 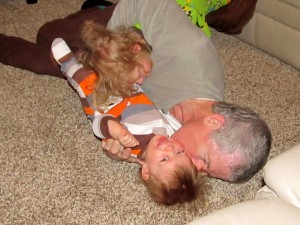 First, my boys grew stronger. Wrestling was a time when their muscles were hardened as they got the chance to muster all of the force they could for as long as they could last. Hearing them grunt and strain as they tried to pin me to the ground was a testimony to how hard they were working. No other exercise could have provided a comparable work out.

Second, we grew closer. Everything about it was delight. If I smiled and said, “Papa needs a break,” they beamed as if they had conquered me. And they had, but not with the force of their wrestling. I was conquered by my affection for them. There was nothing I enjoyed hearing more than hearing, “Papa, can we wrestle?” It meant our relationship was strong. It meant they enjoyed time with me. It allowed me to show them they had a form of access to me that no one else did.

This is not to say there is not a place for combat-imagery for prayer. But we should remember that the person we are aggressively wrestling is not God our Father. We petition our Father to fight these battles on our behalf (Ephesians 6:10-20).

Our role is to stand firm (the primary active verb of this passage; Ephesians 6:13). The spiritual strength to do this was created by our wrestling; as was the emotional strength to have confidence that our Father is greater than our present challenge, whatever it may be.

The time we’ve spent wrestling with him is meant to embolden our confidence that our Daddy is strong enough to conquer anyone or anything that would come against us. The sweet times of wrestling together is meant to solidify our trust that our Father will use his power for our good.

My encouragement is that you would often say to God, “Papa, can we wrestle?” As you do, envision his smile at your invitation and lay into Him with everything you’ve got. Know that you are wrestling “with” Him, not “against” Him. As you do, feel His power and His love. Grow confident that:

Romans 8:31-39, “If God is for us, who can be against us? He who did not spare his own Son but gave him up for us all, how will he not also with him graciously give us all things? Who shall bring any charge against God’s elect? It is God who justifies. Who is to condemn? Christ Jesus is the one who died—more than that, who was raised—who is at the right hand of God, who indeed is interceding for us. Who shall separate us from the love of Christ? Shall tribulation, or distress, or persecution, or famine, or nakedness, or danger, or sword? As it is written, ‘For your sake we are being killed all the day long; we are regarded as sheep to be slaughtered.’ No, in all these things we are more than conquerors through him who loved us. For I am sure that neither death nor life, nor angels nor rulers, nor things present nor things to come, nor powers, nor height nor depth, nor anything else in all creation, will be able to separate us from the love of God in Christ Jesus our Lord.”

I hope this post reminds you that the power of prayer is not in the eloquence of our request, but in the love and faithfulness of the One you address… as Father.