A Counseling Commentary on Philippians: What Really Matters in Debates about Christianity? 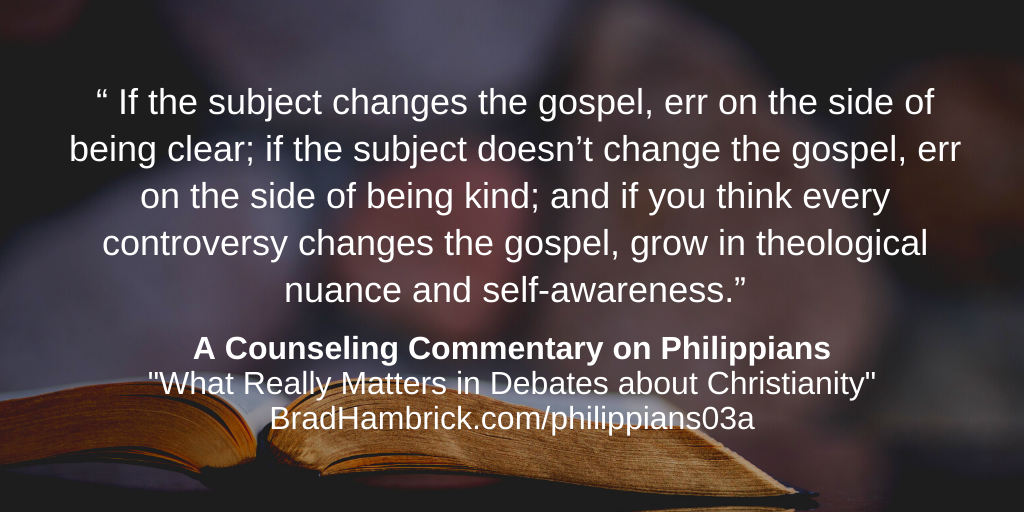 Finally, my brothers, rejoice in the Lord. To write the same things to you is no trouble to me and is safe for you.

2 Look out for the dogs, look out for the evildoers, look out for those who mutilate the flesh. 3 For we are the circumcision, who worship by the Spirit of God and glory in Christ Jesus and put no confidence in the flesh— 4 though I myself have reason for confidence in the flesh also. If anyone else thinks he has reason for confidence in the flesh, I have more: 5 circumcised on the eighth day, of the people of Israel, of the tribe of Benjamin, a Hebrew of Hebrews; as to the law, a Pharisee; 6 as to zeal, a persecutor of the church; as to righteousness under the law, blameless. 7 But whatever gain I had, I counted as loss for the sake of Christ. 8 Indeed, I count everything as loss because of the surpassing worth of knowing Christ Jesus my Lord. For his sake I have suffered the loss of all things and count them as rubbish, in order that I may gain Christ 9 and be found in him, not having a righteousness of my own that comes from the law, but that which comes through faith in Christ, the righteousness from God that depends on faith— 10 that I may know him and the power of his resurrection, and may share his sufferings, becoming like him in his death, 11 that by any means possible I may attain the resurrection from the dead.

Do you ever get distracted and disillusioned by the tone of debates within Christianity? It feels like we’re told to believe that the future of the church rises or falls based on how we respond to the latest cultural, political, or theological debate. Everything is “code red.” In this passage, Paul is engaging one of those debates. We will notice both that Paul gets riled up and that he tries to help us see that there are few things worth this level of intensity.

We get the sense that Paul starts by trying to stay pastorally calm. He can tell he is about to get upset, but he doesn’t want the Philippian church to think his ire is raised by their question. The debate in the early church about circumcision was frequent and intense. It should be instructive and comforting for us to realize the church debates that seemed paramount in one generation no longer persist.

Paul had taught the Philippians about circumcision before – that it was not essential to salvation – but they are uncertain again because of how important circumcision seems to some prominent teachers. Let’s not get lost in the debate, but instead, notice the dynamic and how Paul responds

Circumcision is a biblical concept; meaning, we learn about it in the Bible. It played an important role of distinction for God’s people in the Old Testament. It was a sign of obedience and faith, somewhat akin to the New Testament practice of baptism. Because of this, some passionate Christian teachers took a strong stance that circumcision was still necessary for genuine faith. Other Christian teachers took an equally passionate, opposing stance.

Who got hurt? As the African proverb says, “When elephants wrestle, it is the grass that withers.” The lay people in the church were the ones distracted and confused by the intensity of the debate. They didn’t know which influential, passionate Christian teachers were right. Hence, Paul was writing to them again.

Notice what word Paul uses to affirm their choice to ask him this same question again: “safe.” This debate for them wasn’t intellectual; it was about their soul. They felt unsafe because of their uncertainty. Paul saw this, and even though he had strong opinions on the subject (as we will hear), it allowed him to say “it is no trouble” to reply to their questions.

Paul’s transition in tone is abrupt. He refers to those that insist on circumcision as “dogs,” “evildoers,” and as “those who mutilate the flesh” (v. 2). On the question whether circumcision was essential for salvation, there was a clear right answer. To add circumcision to faith in Christ was heresy. To distort God’s plan of salvation merited a strong rebuke. However sincere these teacher’s beliefs regarding circumcision were (likely rooted in their appreciation for the role of the Jewish faith in the emergence of Christianity), they were not to be followed.

Jesus would also occasionally label heretical teachers and dangerous people by giving them names like “dogs and pigs” (Matt. 7:6), “blind guides” (Matt. 23:15), and “hypocrites and whitewashed tombs” (Matt. 23:25-28). Truth and error need to be divided. It is not wise or God-honoring to paint gray what God has declared black and white.

But, like Paul, Jesus’ reason for making this distinction was pastoral. In Matthew 23:37 Jesus reveals the audience he had in mind as he was warning against following blind guides: the people of Jerusalem, “How often would I have gathered your children together as a hen gathers her brood under her wings, and you were not willing!” Jesus was not trying to win a debate; he was trying to protect his people. Paul was trying to protect his friends and the church he planted in Philippi.

But it wasn’t motive alone that justified the severity of their words. If so, everyone who thought they spoke strongly for a good cause would be justified in what they said. At another time, Paul was convinced he was right on the freedom of believers to eat meat from animals sacrificed to idols – another hot topic in the early church – but his tone was much more amenable (I Cor. 8). Paul could take a more tempered approach to important theological topics.

For Paul, this topic was more than an early church controversy. It was also his biography. Prior to being a Christian, Paul was the best of the best at what these false teachers said was important. Paul was the eighth degree blackbelt or PhD at the system of salvation these teachers proposed. Paul uses his testimony as evidence for why their teaching was false; he deconstructed his impressive pre-conversion resume to show that only faith in Christ is necessary for salvation.

However, if we just read Paul’s list and say, “We don’t do those things; we’re not all-star in Jewish faith practices,” we are the brink of doing exactly what Paul warned us against; justifying ourselves by what we do or don’t do.

Instead, we should recognize how gut-wrenching it was for Paul to make this transition and ask ourselves, “What was my pre-conversion system of self-validation? How did I convince myself that because I did [blank] and didn’t do [blank] that I was good?” Paul’s list is an invitation for us to make our own list. We don’t honor this passage by merely avoiding what Paul needed to forsake. We honor this passage by following Paul’s example of courageous, gospel-centered self-evaluation.

If we look at Paul’s list, we will notice three types of things that Paul did as a means of trying to earn salvation.

Use these three categories to make your own lists. When we read verses 4-6 as a confession rather than the climax to a theological debate it becomes an invitation to humility rather than a license to pride. It becomes a window into our own soul. Once you have those lists, do with them what Paul does in the next verses.

Paul says he “counts them as loss” (v. 7), further he calls them “rubbish” (v. 8). We might ask, “Does this mean he took no satisfaction in his family name, his religious practices, or obeying God’s law?” It would be awkward to say that no satisfaction should come from these things.

But Paul clarifies what he means in verse 9. Paul says these things give him no “righteousness of his own.” If we tie this passage with Luke 9:23-24, we can deduce that Paul was able to enjoy his family name, religious practices, and obedience more when the weight of his salvation was taken off them. In these verses Jesus says,

“If anyone would come after me, let him deny himself and take up his cross daily and follow me. For whoever would save his life will lose it, but whoever loses his life for my sake will save it.”

When Paul tried to save his life by trumpeting his family heritage, being devout, and obeying the law he felt the futility of losing his life. Nothing he did was never good enough. Hence, he went to such extremes. When Paul realized, as he wrote in Galatians 5:1 that, “For freedom Christ has set us free; stand firm therefore, and do not submit again to a yoke of slavery,” these actions could be as life-giving as God intended.

When we try to take the benign parts of our life and make them do things like bring meaning to suffering and merit heaven (v. 10), we realize they are rubbish for those purposes. They are worthless for changing our eternal future and giving meaning to the hardships we face in this fallen world. Paul is imploring his friends in Philippi to forsake this style of thinking.

It would be easy for us to take the strength of Paul’s argument and feel bad for enjoying these kinds of good gifts from God. By way of metaphor, think of a child who pulls the covers over their head to protect themselves from the monster under their bed. A parent would say, “That blanket is rubbish for what you’re trying to use it for.” That is what Paul is saying in these verses.

However, if the child, then falsely deduces that blankets are worthless or bad, they would be cold all night as they forsook the blanket to honor their parents. But the parents gave them the blanket to keep them warm; like God gave us the law to protect us (Gal. 3:24) and encourages us to value a good name (Prov. 22:1).

It would be easy for this child to get mad at their parents for forcing them to be cold. But that is not what the parents were doing. In the same way, God is not advocating for an over-reaction in this passage. God is not asking Paul to forsake anything good thing on his lists. God is asking Paul none of these good things can save him.

But many of us over-react to God’s teaching and feel like good things are forbidden because we once gave them too much weight. Let us use this passage as the warning God intended – add nothing to faith in Christ for salvation – and avoid placing every Christian debate at “code red” level or over-reacting to good things we once valued too much.