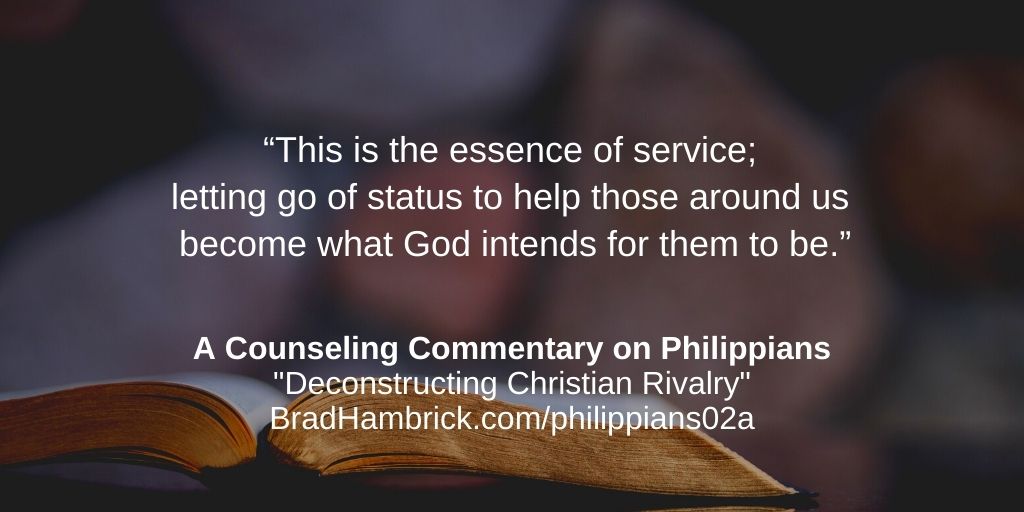 So if there is any encouragement in Christ, any comfort from love, any participation in the Spirit, any affection and sympathy, 2 complete my joy by being of the same mind, having the same love, being in full accord and of one mind. 3 Do nothing from selfish ambition or conceit, but in humility count others more significant than yourselves. 4 Let each of you look not only to his own interests, but also to the interests of others. 5 Have this mind among yourselves, which is yours in Christ Jesus, 6 who, though he was in the form of God, did not count equality with God a thing to be grasped, 7 but emptied himself, by taking the form of a servant, being born in the likeness of men. 8 And being found in human form, he humbled himself by becoming obedient to the point of death, even death on a cross. 9 Therefore God has highly exalted him and bestowed on him the name that is above every name, 10 so that at the name of Jesus every knee should bow, in heaven and on earth and under the earth, 11 and every tongue confess that Jesus Christ is Lord, to the glory of God the Father.

This is a beautiful and familiar passage; one that seasoned Christians know well. Its content is so rich and well written because much of it was originally a hymn in the early church (v. 6-11). Even when translated into English this passage retains much of its poetic beauty and flow. Because of its eloquence we can be tempted to let it stand on its own; that is, interpret it free from the reason Paul quoted this hymn. But when we place it back in the context of Paul’s letter, we see what Paul is trying to do in the life of Philippians, not just how the early church celebrated the deity and humanity of Christ.

That begs a question we should always ask when we’re reading the Bible, “What was the author trying to do in the life of the reader?” One way to determine what is driving a passage is to look for the imperative tense verbs (i.e., commands). This reveals what the author wants to be different in the life of the reader. In this case, we find this centerpiece idea in verse 3, “Do nothing from selfish ambition or conceit.”

To begin, Paul draws upon his relationship with the Philippians, asking them to complete his joy by remaining unified (v. 2). For such a theologically rich passage, it is worth noting that Paul’s initial appeal is not theological, but relational. Paul is going to call the Philippians to profound selflessness. But Paul doesn’t say, “Because I’m right about who Jesus is, you should do as I say.” Instead, his appeal is more like, “Because I know who Jesus is, I lived among you differently and I hope my example compels you to do likewise.” Even in how Paul sets up his appeal, he is modeling the humility he is advocating for.

Notice also that Paul begins with a staccato list of motivations (v. 1).

Paul recognizes that Christians are not equally motivated by the same aspects of the faith. Paul is affirming that it’s okay for some Christians to be more motivated by encouragement, comfort, belonging, or affection than others. This is not an area where Christians need to be the same. One type of motivation is not ranked as being “better” than the others. Christian unity allows for this type of diversity in personality and motivations.

Churches and Christian organizations often struggle to live this out. When we over-emphasize unity, we can mistakenly advocate for uniformity. When we over-emphasize valuing differences, we can neglect calling one another to the core beliefs and values of the Christian faith. These are the kind of differences over which the rivalry Paul is addressing often emerges: “You’re not expressive enough in worship to really be participating in the Spirit,” or, “If you took enough encouragement in Christ you wouldn’t experience those unpleasant emotions,” or “If you were really sympathetic like Jesus, you would care more/less about [blank].”

Second, in humility count others more significant than yourselves (v. 3). Paul gives a contrasting positive command. Humility is the alternative to conceit. The reality is, with leadership comes social significance. This is inescapable. But a leader doesn’t have to buy into the increasing status. Humility is about self-perception and willingness to sacrifice, regardless of our role within a group. Humility expresses itself in simple actions like asking good questions, active listening, showing interest in others, and affirming the strengths of others. These types of actions remove rivalry from a social setting.

Third, let each of you look not only to his own interests, but also to the interests of others (v. 4). This third command is the “how” of the first two commands. Good parents of young children may be the best example, other than Christ, of this command in action. Good parents lead their family, but they do so with the interest of their children at the forefront of their mind. This mindset expresses itself in simple, non-glorious choices: managing their schedule to protect nap time, preparing food, changing diapers, and sacrificing sleep. No parent doing these things feels like their actions are grand. But anyone who grew up in a home where these actions were absent knows how significant and life giving they are.

Fourth, have this mind among yourselves, which is yours in Christ Jesus (v. 5). The fourth command is the “who” of the first three commands. Examples bring commands to life. If we wanted to be a great chef, athlete, accountant, or executive, we would look for people who are excellent in these areas to learn from. But the better we get to know anyone, the more we realize our best attempts at selflessness are tainted. Selfishness infects us all. That is why Paul points us to Jesus.

The Example of Christian Leadership (v. 6-11)

This is when Paul begins to quote the early church hymn. Why? Paul was never short for words. He wrote more books of the New Testament than anyone else. We need to realize that Paul’s main objective as to change lives; not just say true things. The better we say things, the more memorable they are, and therefore, they tend to have a bigger impact on people.

The beauty of this hymn made it memorable. That it would have been sung frequently at church gatherings, would make it a perpetual reminder of his point. Paul wanted to use every means possible to increase the impact of the great truths of the gospel. The message of the gospel is simple and clear (I Corinthians 2:1-5). We don’t need to get fancy with it. But we do want to be clear and memorable to serve the person(s) we are talking with.

This hymn has four truths about Jesus that frame how we, as Christians, should view the leadership opportunities and the social roles that come with them. These truths are also sequential; they build from humility and selflessness to the honor that God bestows on those who use their influence well.

First, though he [Jesus] was in the form of God, did not count equality with God a thing to be grasped (v. 6). God the Father, God the Son, and God the Spirit are co-equals; there is no hierarchy of value in the Trinity. So, this verse doesn’t mean Jesus considers himself “less than” the Father. It means that rank didn’t matter to Jesus. When we embrace this, we experience the liberating effects of humility. Despite the social roles people may be in, we are equally valuable because we are equally made in the image of God. If we get this, we can quit grasping for status.

Second, [Jesus] emptied himself, by taking the form of a servant, being born in the likeness of men (v. 7). When our ego is out of the way, we are willing to do whatever needs to be done. For Jesus, this meant the sacrifice of the incarnation as the first step towards his ultimate sacrifice on Calvary. Jesus was willing to identify with those who were “less than” him (i.e., sinful humanity) so that we could become what God intended us to be. This is the essence of service; letting go of status to help those around us become what God intends for them to be.

This is the essence of service; letting go of status to help those around us become what God intends for them to be. Click To Tweet

Third, being found in human form, he humbled himself by becoming obedient to the point of death, even death on a cross (v. 8). While humility is good, it is not always enjoyable. We can rest knowing that whatever sacrifices our servant-leadership roles require of us, a greater sacrifice was made on our behalf. We may get the temporal “short end of the stick” but, eternally, the sacrifice made for us will always be greater than the sacrifices asked from us. As we wrestle with the temptation to allow our sacrifices to become a source of pride or entitlement, this reality protects our souls.

Fourth, therefore God has highly exalted him and bestowed on him the name that is above every name, so that at the name of Jesus every knee should bow, in heaven and on earth and under the earth, and every tongue confess that Jesus Christ is Lord, to the glory of God the Father (v. 9-11). These verses are the eternal enactment of Romans 13:7, “Give honor to whom honor is owed.” No Christian sacrifice is in vain. But notice who does the exalting. God the Father does the exalting, not Jesus. The inference is that, even when Jesus is getting the due honor for his sacrifice, he is more motivated by the joy of what his sacrifice accomplished for others than his own glory (Hebrews 12:2). We should follow the same example. Our joy should be in the blessing we provide to those we are serving.

This passage is not meant to make us generically marvel at Jesus. It is meant to make us marvel at Jesus for a specific reason. A reason that helps us with a common human struggle; namely, how to embrace the social status that comes with leadership opportunities (I Timothy 3:1) without allowing these roles to produce selfishness and conceit in our hearts. This struggle is real. We are naïve to think we will not face it (James 3:1-2). Valuing what Jesus did on our behalf in such a way that Jesus is the hero we long to emulate, is the only protection that can allow us to fill the role of pastor, parent, teacher, coach, boss in a way that is a blessing to church members, children, students, athletes, and employees. This is what allows us to be the aroma of Christ wherever we are endowed with influence (2 Corinthians 2:15-17).