A Counseling Commentary on Philippians: How Confidant Can Christians Be About Good Outcomes in Hard Times? 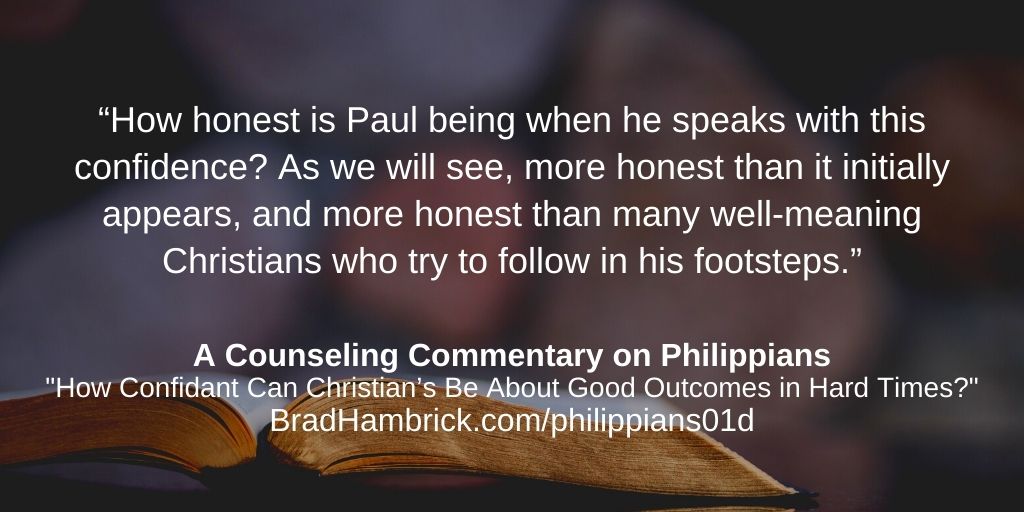 19 For I know that through your prayers and the help of the Spirit of Jesus Christ this will turn out for my deliverance, 20 as it is my eager expectation and hope that I will not be at all ashamed, but that with full courage now as always Christ will be honored in my body, whether by life or by death. 21 For to me to live is Christ, and to die is gain. 22 If I am to live in the flesh, that means fruitful labor for me. Yet which I shall choose I cannot tell. 23 I am hard pressed between the two. My desire is to depart and be with Christ, for that is far better. 24 But to remain in the flesh is more necessary on your account. 25 Convinced of this, I know that I will remain and continue with you all, for your progress and joy in the faith, 26 so that in me you may have ample cause to glory in Christ Jesus, because of my coming to you again.

27 Only let your manner of life be worthy of the gospel of Christ, so that whether I come and see you or am absent, I may hear of you that you are standing firm in one spirit, with one mind striving side by side for the faith of the gospel, 28 and not frightened in anything by your opponents. This is a clear sign to them of their destruction, but of your salvation, and that from God. 29 For it has been granted to you that for the sake of Christ you should not only believe in him but also suffer for his sake, 30 engaged in the same conflict that you saw I had and now hear that I still have.

Paul starts this passage boldly, “For I know that through your prayers and the help of the Spirit of Jesus Christ this will turn out for my deliverance” (v. 19). But let’s place this in context: Paul is in prison, knows he might be executed, and has fellow pastors leveraging his misfortune to increase their influence in the church. How honest is Paul being when he speaks with this confidence? As we will see, more honest than it initially appears, and more honest than many well-meaning Christians who try to follow in his footsteps.

A Broad Definition of Deliverance

While verse 19 is a confidant statement, let’s consider the things that Paul says in this passage that give us a different window into how his mind and emotions are responding.

Yet Paul returns to his original posture of confidence in verses 24-25, “But to remain in the flesh is more necessary on your account. Convinced of this, I know that I will remain and continue with you all.” What is going on here?

The dissonance we feel as we read this passage stems from the variance in how we define the word deliverance and how Paul is using the word. We define the deliverance to mean “an outcome where everything is okay and cheerful.” In verses 20-21 Paul explains what he means this way, “Christ will be honored in my body, whether by life or by death. For to me to live is Christ, and to die is gain.”

Bondage to Paul meant sin, dishonoring Christ. Therefore, deliverance meant the ability to withstand temptation and honor Christ in any circumstance. This definition brings coherence to what feels like mixed messaging in this passage. Paul was confidant God was able to deliver him from temptation (Matthew 6:13). But this confidence in God did not require Paul to downplay the realness of temptation or weight of hardship he was facing. Paul could be confidant and honest.

If we were going to try to take Paul’s example and turn it into a model (not the model, because Scripture talks about facing suffering differently in other places) of how to talk about our hardships, it would parallel the “compliment sandwich” approach to offering constructive criticism. The model is positive-negative-positive; affirm something the person did well, offer feedback how they could improve, and affirm the over-arching good they were trying to achieve.

Paul wanted his example of facing hardship to be edifying for his friends in Philippi, “So that in me you may have ample cause to glory in Christ Jesus, because of my coming to you again,” (v. 26). Paul’s love for them and resulting influence with them was part of what he used to galvanize his faith to face the hardships he was experiencing.

If we were going to summarize this opening paragraph of our passage in three commands it would be: (a) remember what’s true, (b) be honest about what’s hard, and (c) compel yourself with love for those with whom God has given you influence. This is how Paul built resilience amid his hardship.

The pivot concept between verses 19-26 and verses 27-30 is this idea of compelling yourself with love for those with whom God has given you influence. In these final three verses, Paul is flipping the application of verses 19-26. Paul is asking the Philippians to use the influence their faithfulness has on him to compel their perseverance. That is why he transitions this way, “Only let your manner of life be worthy of the gospel of Christ, so that whether I come and see you or am absent, I may hear of you that you are standing firm in one spirit, with one mind striving side by side for the faith of the gospel,” (v. 27).

When we read these verses, we are watching Proverbs 27:17 in action. We are ease dropping on what it looks like for friendship to sharpen each friend as iron sharpens iron. In effect, Paul is saying, “When in prison, I think about how my responses would impact your faith and it helps me remain steadfast. I want you to think about how your responses to one another in conflict impacts my faith. Let’s both use how much we value our friendship to compel us towards Christlikeness.”

It is worth noting where Paul chooses to focus his attention regarding Christlikeness for the Philippians. He focuses on unity. Why did Paul choose this focal point? When times are hard, the human tendency to use an every-person-for-themselves mentality. The result is division. No one trusts anyone. That is why Paul chose unity as his focal point. Other hardships create other temptations. We need to be as intentional as Paul was in picking the which virtues are most important for the current difficulties we are facing.

We learn something else about iron-sharpening-iron friendships from this passage. Friends can and should be honest with one another. Paul wasn’t making an accusation (i.e., “stop being divisive”). He was being honest about what he knew would be hard (i.e., “when times are hard, selfishness is more tempting”). For friendship to do what God intended it to do, maturity was needed from Paul and the Philippians. For Paul, maturity was the courage to be honest and articulate the inevitable challenge. For the Philippians, maturity was the humility to acknowledge how their hardship affected them before they began betraying one another.

In that sense, verse 27 is an invitation to the Philippians to respond to their hardship in the way that Paul responded to his hardship in verses 22-23. Paul was honest about what was hard/tempting in his life to compel the Philippians’ willingness to be honest about what was hard/tempting in their lives. From this we notice that the sanctifying impact of friendship has momentum. In a word, that momentum is honesty. The more honest we are, the more positive momentum builds. If we want the Bible to change our lives, we must be as honest as the people in the Bible. Transparency about our lives may be the most neglected aspect of character formation and discipleship in our day.

Transparency about our lives may be the most neglected aspect of character formation and discipleship in our day. Click To Tweet

Why Speak with Certainty?

Let’s come back to the question, “Why did Paul speak with such confidence about something he admitted he wasn’t that confident about?” In verse 19 Paul said, “I know” but in verses 22 and 23 he said, “I cannot tell… I am hard pressed.” We partially answered this question when we examined what Paul meant by being delivered. But there is more juice in this orange.

Paul looked at two outcomes: I am going to live or be executed. If he was executed, his story would be over; no planning would be needed. If he lived, he would prioritize encouraging his friends in Philippi who were so dear to him. In one outcome, there would be no more choices to make. In the other, there would be choices. Paul was confident which option merited his attention and what he would do if it came to fruition, so that is where he focused his attention.

This is what a sports coach does with a team towards the end of a game. The coach focuses the team’s attention on the things they can control and prepares them to respond to the situations that can result in them winning the game. It’s not lying. It’s motivation management. In the context of Philippians, it is stewardship of our soul’s morale.

Paul’s example gives us more guidance on facing hard times. Paul summarized the possibilities in front of him: (a) receive the death penalty, (b) remain in prison, or (c) get released. Paul determined how he would respond: (a) be excited to see Jesus, (b) continue prison ministry, or (c) go encourage the Philippians. Paul focused his future thinking on the option where fruitful planning was possible, “C,” and his present thinking on where he currently had the most influence, “B.”

Knowing what he would do in each situation allowed him to speak with confidence. A growing enthusiasm for what he would do if his preferred option came to be, allowed him to build morale. Knowing God’s faithfulness even if the worst-case scenario happened, allowed his discouragement not to get the best of him. In this passage, we get a beautiful window into Paul doing all three of these things. That God inspired this to be included in the Bible affirms that this is wise practice for us as we face our hardships.