A Counseling Commentary on James: Quick to Speak… When We Feel Hurt 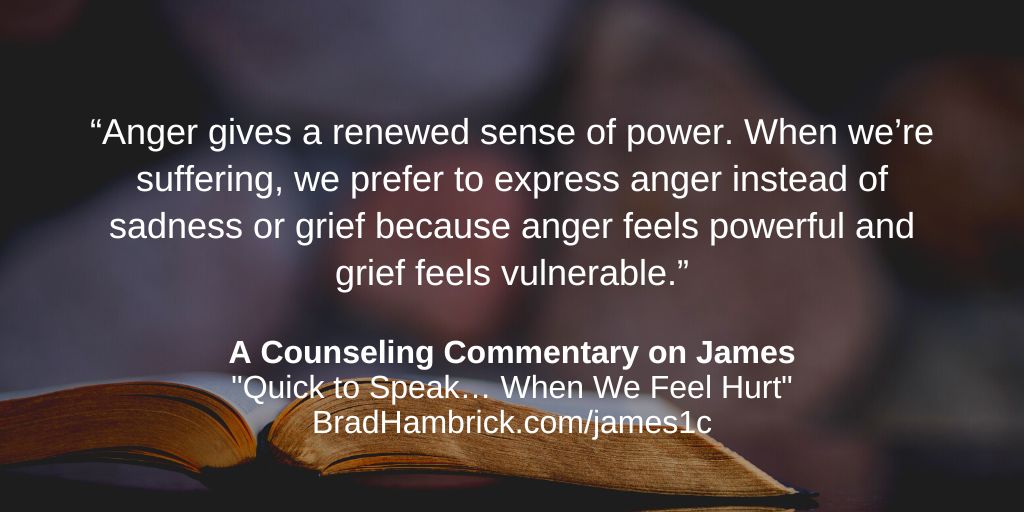 19 Know this, my beloved brothers: let every person be quick to hear, slow to speak, slow to anger; 20 for the anger of man does not produce the righteousness of God. 21 Therefore put away all filthiness and rampant wickedness and receive with meekness the implanted word, which is able to save your souls.

22 But be doers of the word, and not hearers only, deceiving yourselves. 23 For if anyone is a hearer of the word and not a doer, he is like a man who looks intently at his natural face in a mirror. 24 For he looks at himself and goes away and at once forgets what he was like. 25 But the one who looks into the perfect law, the law of liberty, and perseveres, being no hearer who forgets but a doer who acts, he will be blessed in his doing.

26 If anyone thinks he is religious and does not bridle his tongue but deceives his heart, this person’s religion is worthless. 27 Religion that is pure and undefiled before God the Father is this: to visit orphans and widows in their affliction, and to keep oneself unstained from the world.

To avoid a trite application of this passage – “think before you speak,” let’s start with a brief fictitious case study. Imagine a friend comes to small group. Your friend’s boss has been forcing them to work overtime without additional pay. They’re furious. As they get lathered up, they become increasingly derogatory about their boss. The more they talk, the harder it is to decipher what’s true and what’s “just their pain talking.” Regardless, the ability to conduct small group is disrupted. What do you do?

That’s the kind of situation James is addressing. These believers were being oppressed. They were angry about it. Their ability function as a church was being compromised as their anger spilled towards one another (James 4:1-3). James was correcting them, not merely so they would “be nicer,” but to preserve the Christian community they had fled persecution to remain a part of.

In this passage, we’ll trace James’ counsel on who to navigate intense anger over unjust treatment that begins to disrupt healthy, supportive relationships.

Notice how James begins his confrontation. He calls them “beloved brothers.” James was letting them know that his correction he was speaking as someone who was for them, not against them. This is important because when we’re hurting, everyone starts to feel like an enemy.

Familial language reminds these believers of the relationship they share with the people with whom they are quick to speak with. They weren’t flying off the handle with their oppressor, but with their supporters.

When do we tend to be quickest to speak? When we’re hurting. Too often, the more we’re hurt, the sharper our words get. In verse 21, indicates these believers’ words were “filthy” and rampantly wicked. James does not allow the pain they were legitimately feeling to excuse tearing down their fellow brothers and sisters in Christ. Speaking this way was wrong, no matter what prompted it.

Let’s trace what would happen. Person A comes to church and talks to Friend B about how bad things are at work (we glean this from the context of James letter). Person A gets lost in their pain. Their words become fast, sharp, and attacking (v. 21). Friend B gets defensive because they don’t like being talked to this way and responds back assertively (v. 19). Soon, a fierce argument starts. The heat and sharpness of both their words elevate.

What is Paul’s initial solution? Both Person A and Friend B need to remember they are brothers and sisters in Christ. Remembering they are in a safe place (familial relationship) should enable them to listen better. Listening slows down the conversation. Hard things should be talked about; that’s how James started his letter (1:2-18). But for talking about hard things to be beneficial requires maturity from both friends. That’s where James turns next.

James calls these believers to be mature – to express righteousness (v. 20) as they navigate the things that make them angry. Righteous anger is not simply being angry about the right things (in this case, injustice), but also about producing the fruit of how we express our anger. We should evaluate our emotions not merely based on their prompt, but also the effect of our emotions.

We should evaluate our emotions not merely based on their prompt, but also the effect of our emotions. Click To Tweet

James is clear that the maturity he is advocating for is not “just giving up” and “accepting the situation as it is.” That would be weakness. The word James chooses to encapsulate maturity in these circumstances is meekness; that is, power under control. Weakness is a lack of power. Meekness is the ability to maintain composure as we express the power we have in moments that need to change. Without meekness, the problems “out there” (in this case, oppression in the workplace) begin to destroy the relationships “in here” (in this case, unity between believers).

James concludes this section by reminding them of the basic gospel message. Even when we’re facing unjust oppression, we need to allow the gospel (“implanted word”) to change our hearts. Otherwise, our angry response (what are responsible for) to suffering (things are not responsible for) will destroy the relationships we hold dear. If we allow people sinning against us to excuse our sinning against others, we will be alone in our hardest times.

When James says, don’t be “hearers only” this indicates these believers were still regularly involved with their church family. They were regularly hearing God’s Word taught. These people hadn’t stopped going to church. James identified their temptation as believing that the harshness of their circumstances meant that God needed to change the world around them more than they needed God to change them.

This accounts for the visual imagery James uses next: a mirror. Imagine you look in the mirror in a restaurant bathroom: on the wall behind you if offensive graffiti, but on your cheek is an emerging sore that turns out to be skin cancer. James is saying, when we’re suffering, we focus on the graffiti (problems around us) and forget to address the cancer (problems within us). Our life deteriorates as we focus on what we have the least control over.

Some of us might be prone to think this is bad because it’s hypocritical. Maybe it is, but in the context of suffering it also exacerbates the sense of powerlessness that suffering brings. We can say lots of true things about why the graffiti is wrong and why it was offensive. But that doesn’t impact the person(s) who wrote it. The result? We feel powerless. All the while, because of the distraction, our cancer – that we could have taken to a physician – grows unchecked.

Admittedly, the logic of this paragraph can be hard to follow and trace back to James’ statements just before this. How does James get from harsh anger between believers to widows and orphans? We trace the connection by asking, “Who would be hurt by these believer’s harsh words?” As we’ve already alluded to, their fellow believers, not their oppressors.

Imagine a carpenter building a house with the intention of burning it down. Unless the carpenter is working on a movie set, this would be “worthless.” That is how James views the faith of those who tear down the church they claim to love with their harsh words.

But let’s now forget the context. The tone of this letter is sympathetic, not condemning. What is prompting these believers’ anger? They are trying to regain power they no longer have. Back home, in Jerusalem before they fled persecution, they had power: social connections and good jobs. Without those things, they feel powerless.

What does anger do? Anger gives a renewed sense of power. When we’re suffering, we prefer to express anger instead of sadness or grief because anger feels powerful and grief feels vulnerable.

Anger gives a renewed sense of power. When we’re suffering, we prefer to express anger instead of sadness or grief because anger feels powerful and grief feels vulnerable. Click To Tweet

James draws upon examples of those who have no power – orphans and widows – to re-center their emotions. In effect, James is saying, “Don’t try to identify with the powerful by fueling your anger. That is faux power and only hurts those who love. Remember, the Christian life is about identifying with the powerless (Matt. 5:12). When you are emotionally grounded this way, it is healthier for you personally, and maintains unity in the church – God’s instrument for effecting change culturally. That is true Christianity.”

As an example of responding to injustice in way that, unlike what James is addressing here, protects and invites the vulnerable to come near, notice that even when Jesus cleared the temple (Matthew 21:12-17) that “the blind and the lame came to him in the temple” (v. 14) even as the fleeing pigeons were still in sight. Jesus responding to injustice did not cause the weak to shrink back in fear. True religion, James reminds us, is inviting to those in need of protection.

Let’s return to the opening case study. How would we respond to that friend who came to small group all fired up about their jerk of a boss? We would listen patiently, thereby slowing the conversation down. Our posture would remind our friend that they are in a safe place, so they can speak in a way befitting of being in a safe place.

If our friend insists on being harsh, even filthy, with their words, we would ask them not to bring the same destructiveness into the church (a place of support) as they are experiencing in the world (a place of oppression). We want to listen with compassion, but not in a way that abets them spreading the misuse of power (in this case, their anger) within their own soul or among their Christian friends.

We would remind them, “You may not feel like you have any power. But your words are affecting me as you indiscriminately attack everything around you. That is power. I am trying to listen with compassion and patience, but your anger is starting to push people away. I am afraid you will soon feel like the victim of your own anger when you’ve pushed people away and are alone – like an orphan or widow. Can you talk with me as is this was a safe place to talk about hard things? I know that takes a lot of maturity. But it is what God calls us to in order to protect the family-ness God wants the church to be for us.”