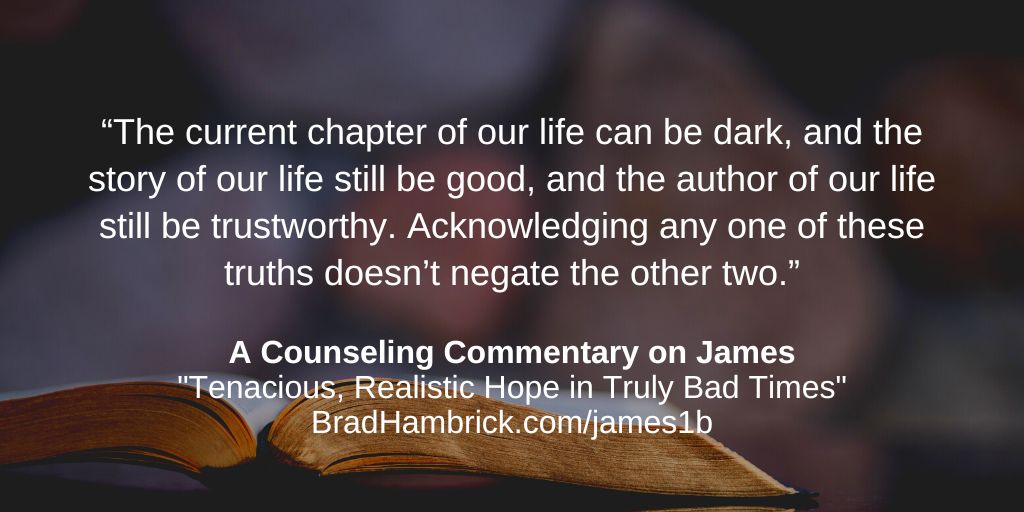 2 Count it all joy, my brothers, when you meet trials of various kinds, 3 for you know that the testing of your faith produces steadfastness. 4 And let steadfastness have its full effect, that you may be perfect and complete, lacking in nothing.

5 If any of you lacks wisdom, let him ask God, who gives generously to all without reproach, and it will be given him. 6 But let him ask in faith, with no doubting, for the one who doubts is like a wave of the sea that is driven and tossed by the wind. 7 For that person must not suppose that he will receive anything from the Lord; 8 he is a double-minded man, unstable in all his ways.

9 Let the lowly brother boast in his exaltation, 10 and the rich in his humiliation, because like a flower of the grass he will pass away. 11 For the sun rises with its scorching heat and withers the grass; its flower falls, and its beauty perishes. So also will the rich man fade away in the midst of his pursuits.

12 Blessed is the man who remains steadfast under trial, for when he has stood the test he will receive the crown of life, which God has promised to those who love him. 13 Let no one say when he is tempted, “I am being tempted by God,” for God cannot be tempted with evil, and he himself tempts no one. 14 But each person is tempted when he is lured and enticed by his own desire. 15 Then desire when it has conceived gives birth to sin, and sin when it is fully grown brings forth death.

16 Do not be deceived, my beloved brothers. 17 Every good gift and every perfect gift is from above, coming down from the Father of lights, with whom there is no variation or shadow due to change. 18 Of his own will he brought us forth by the word of truth, that we should be a kind of firstfruits of his creatures.

James doesn’t waste any time, does he? It’s almost as if James enters a funeral with balloons instead of flowers and exclaims, “Cheer up!” We can imagine Paul pulling James over to the side and reminding him, “This is a time to weep with those who weep (Rom. 12:15b). No one is rejoicing (Rom. 12:15a) when they’re wrestling with the hardships of being a refugee and starting a new life.” As we’ll see, James is not as clumsy as he initially appears, but knowing the context of this letter, it is appropriate for us to be initially taken off guard.

Musically, this passage is staccato, but still one song. It has many abrupt notes (i.e., points), but they do flow into one melody (i.e., big idea or theme). At first glance, each paragraph seems to make a new point. But as we recognize the melody that connects the notes, we’ll begin to see the pastoral heart and skill of James. We’ll learn to care for those who are in prolonged seasons of suffering.

The thread that ties these early paragraphs together is a caution against surrendering to the sense of hopelessness and passivity that often accompanies unjust suffering. To see this, notice what James calls these believers to rejoice about. He does not call them to rejoice in their suffering, but in what their suffering can produce. James doesn’t want their hardship to feel meaningless.

It is worth noting, if these believers could have changed their circumstances, James would have instructed them to do so. James had no problem using imperative tense verbs (i.e., commands). The fact that James is silent about what they could do to change their circumstances is his affirmation, “Your suffering is not your fault. God is not punishing you for something you did wrong.”

These three verses can be paraphrased as, “Even in this hard time, which is not your fault, God is still doing something good in you. Even when so much of the rest of life is discouraging, fully engage what God is doing in you.” From there, James teaches his readers how to maintain an active mindset even when they can’t change their difficult circumstances.

This paragraph addresses the “What’s the point? Why try? There are no good options available,” mentality that permeates seasons of suffering. The way James frames the request for diving wisdom indicates that there are no clear win-win options available to these believers. Every road in front of them looks hard and unappealing.

To reinforce this point, James draws on the themes of doubt and being double minded. When we give into hopelessness, our choices become random, because we don’t think they’re contributing to anything. We feel like a beach ball being battered about by the angry waves on a stormy ocean.

When our choices become random, because we surrender to a sense of futility, we don’t get anywhere. Life becomes a staggering two steps East, one step North, two steps West, one step South. We may be taking many steps, but we get nowhere. God can’t bless that any more than he can fill a bucket with holes in it. James is cautioning these believers against giving into this common temptation suffering brings.

Put yourself in the shoes of these hurting believers. Where does your mind go next? Chances are, we would start to look around and get angry at the people who are unjustly “winning” while we’re unjustly “losing.” That is what James addresses next.

Rightly interpreting these verses requires keeping the context in view. James is not making a universal statement. James is not saying that all rich people should be humiliated because of their wealth or that every poor person is unjustly suffering. He is speaking to a context of oppression.

But, in the context of oppression, these verses do begin to offer comfort. The scales of justice will be balanced. Unjust gain adds to an oppressor’s judgement. Suffering endured with integrity is rewarded by God. These moments matter because God is keeping score.

James draws upon the withering grass imagery of Psalm 37, another passage of Scripture that wrestles with the reality that, in this world, it often looks like the ungodly are winning. Those who benefit from unjust gains are compared with grass; they grow fast but wither in the heat of the sun (representing God’s judgement).

To the double-minded, those who are unsure God really exists or that faith matters, James’ counsel may feel like the platitude, “Cheaters never win.” This is why the double-minded do not persevere long enough to receive God’s reward. James is sympathizing with his friends’ sense of powerlessness without giving into the notion that their choices no longer matter.

That lie – “my choices don’t matter” – is a theme James returns to in the next paragraph. James’ primary point is clear: God will reward those who remain faithful. But James’ metaphor is unclear: what does he mean by “test”? There are two ways we could interpret the word “test.”

First, we could understand “test” like an academic exam. With this connotation, James would be saying God is like a teacher who created these circumstances, like exam questions, to reveal – pass or fail – the quality of these believer’s faith.

Second, we could understand “test” like an adverse circumstance in an athletic event. A coach doesn’t not create mishaps (i.e., bad call, error, untrue bounce of the ball, etc.) but does call his team to respond to the moment in a way that proves they are up to the challenge.

Where James goes with this metaphor supports the second interpretation. James warns, “Let no one say when he is tempted, ‘I am being tempted by God,’” to caution against the academic exam interpretation. Instead, he says people make errors because of our sin nature. We shouldn’t use God’s sovereignty as an excuse for our sin. If we do, we become passive in our faith.

Instead, we need to remain true to our Coach (using the second connotation of the test metaphor) who we believe is faithful to guide us through this hardship. Our God will use this test (adverse circumstance) to prove that persevering in our faith is “worth it” and seeing that proven again will strengthen our faith.

James stays on the theme of how deceptive suffering can be as he concludes this section. But he contrasts the lie of suffering – “nothing matters” – with the truth that God rewards (i.e., gives good gifts to) those who are faithful.

In effect, James is saying, “Yes, this is a dark chapter in your life, but because of God’s faithfulness this chapter is still part of a good book with a good author.” Think of your favorite suspense movie. If it’s a two-hour movie, at the ninety-minute mark, how do things look for the main characters? Bleak. But these dark scenes don’t make it a bad movie.

We see this hope play out in two ways. The first James references directly. James says their current hardship is part of the firstfruits of God’s redemption. These Jewish Christians, who would have been in or around Jerusalem for Jesus’ crucifixion, would see the parallel between the bleakness of their circumstances and the time before Jesus’ resurrection. They came to faith because of a belief/hope that God would bring about this kind of redemption for all creation. Now they’re realizing that God redeems their circumstances through the same kind of process by which he brought about redemption. With God, it is not uncommon for there to be hardship (crucifixion) and waiting (Saturday) before redemption occurs.

The second way these firstfruits would play out, James couldn’t know for sure at the time. But we can see it clearly in hindsight. God inspired words for James to write that James couldn’t know how true they would prove to be. The response of these early Christians to their suffering – in the ways that James counsels them – became a significant prompt leading the early church’s growth. Their faithfulness amid their unjust suffering was literally a firstfruits of how God would take the gospel to the ends of the earth.

What should we take from this early part of James counsel to his friends? Here are five take aways that summarizes how James cares for his suffering friends.