A Counseling Commentary on James: Getting to Know the Author, Audience, and Their Relationship 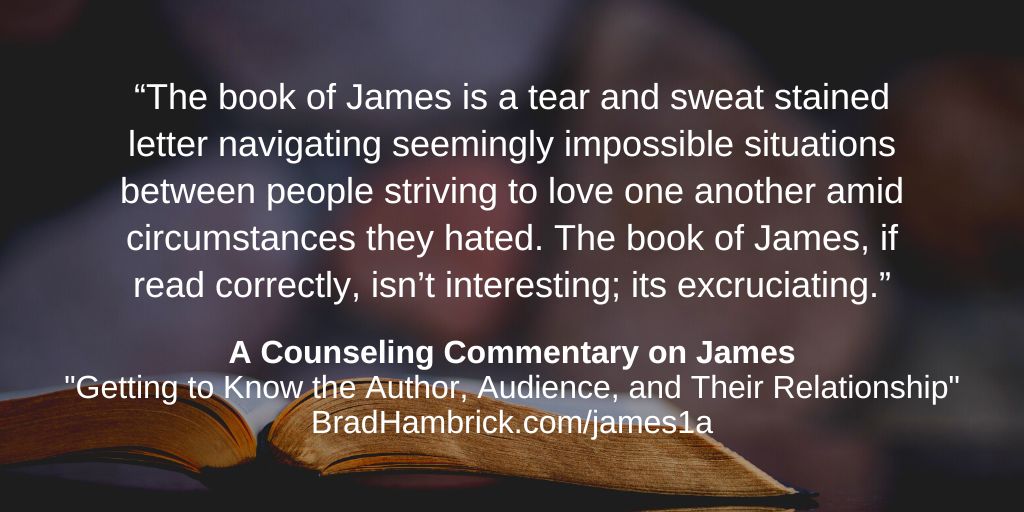 James, a servant of God and of the Lord Jesus Christ,

To the twelve tribes in the Dispersion:

It is easy to skip over this introduction. It’s only 19 words. It doesn’t say much. But it reveals a lot. If we don’t slow down and observe the relationship between James and the believers he was writing to, then we’ll treat the book of James like a series of winsome and practical social media posts.

Ministry and counseling are all about relationships. If that’s true, we should take time to ask: Who was James? Who were these early Christians? What kind of relationship did they share? What were they going through? How did James approach these friends in light of the challenges they were facing? If we do, our ministry approach, especially to those who are suffering, will be sharpened greatly.

If James were writing his Christian resume, he would have said, “James, half brother of Jesus. Lived with the Messiah for 20+ years. Currently, caring for Mary – the mother of Jesus – while leading a growing house church movement.” That’s all true. James would not have been lying if he said these things. But that is not the approach he took.

James starts with, “A servant of God and of the Lord Jesus Christ.” James begins with, “I am one of you,” rather than “I’m special.” In general, this is the better social strategy. Social grandstanding is off-putting. But, as we will see later, when ministering to people who are suffering, it is even more important.

In hard times, friendship matters more than social standing. In effect, James starts his letter by saying, “Like you, I am a servant (in a lowly position) and am someone who calls Jesus, ‘Lord.’” This is not a letter from a famous person trying to make hurting people feel special; like a celebrity visiting military troops stationed abroad. It is a correspondence between people on the same social and spiritual tier striving to honor the same Savior in hard times.

When we’re caring for one another in hard times, we shouldn’t lead a conversation with:

Is education beneficial? Yes. Can books provide useful guidance? Yes. Do experts have helpful things to say? Yes. Do these things come first in a helping relationship? No. If we lead with these things, we’re communicating, “If you were smart enough or more well connected, you could get yourself out of this situation.” Instead, in one another care between believers, we lead with, “You’re not alone. I’m with you.”

That is what James does. He says he is a servant – “I want to know what’s hard and am willing to help in any way I can” – and has a shared purpose in life – in this case, James and these believers shared a common commitment to honor Jesus as Lord. Counseling between believers is best done from beside (not above) by those who have a shared direction and values.

Who Are these Early Christians?

They are the “twelve tribes in the Dispersion.” What does that mean? The early church faced persecution. The recipients of James’ letter were some of these new converts to the new religion of Christianity who were faced with a difficult choice.

These believers were originally Jews who recognized Jesus as the Messiah. They were convinced of the deity of Christ and resurrection to such a degree that they were unwilling to renounce their new Christian faith. Unless they wanted to be imprisoned, they had to flee. Because they fled, they faced all the hardships that are common to people who try to start a new life in a new land.

These are the life challenges and social dynamics James addresses in his letter. These bullet points take you section-by-section through the book of James. We shouldn’t read the book of James as a buffet or practical insights on living well. That’s too light, too trite.

The book of James is a tear and sweat stained letter navigating seemingly impossible situations between people striving to love one another amid circumstances they hated. The book of James, if read correctly, isn’t interesting; its excruciating.

The book of James is a tear and sweat stained letter navigating seemingly impossible situations between people striving to love one another amid circumstances they hated. Click To Tweet

Reading the book of James devotionally while sipping coffee in an air-conditioned room on a cushy couch doesn’t do the book justice. If that is where we are – admittedly, that’s akin to where I’m writing this commentary from, it creates contextual dissonance between us and the original audience. If that’s you too, don’t stop the journey. But do ask yourself some questions.

If you’re not willing to be this honest, you may not be ready for the book of James to read you (i.e., allowing the Bible to interpret your life, not just you interpreting the text). In hard times, there’s no point pretending that these questions don’t exist. The book of James is written in a clear, direct style because James knew his friends were in this kind of situation. There was no reason to play games. Either their new Christian faith made a difference, or they made the biggest mistake of their life when they fled home.

What Kind of Letter is This?

The book of James is a unique New Testament letter. It’s kind of like the epistles that Paul and Peter wrote, but not quite. In many ways, James is a hybrid book: part epistle, part Proverbs. That’s why many Bible teachers refer to James as the New Testament equivalent of the Old Testament book of Proverbs. If we’re going to counsel from James well, we need to understand this.

The context of these early believers helps us understand why James would take this approach. Undoubtedly, whenever James got to hear from or about these friends, he was peppered with difficult, raw questions. They needed practical help, not lofty insights. They were tired from hard work and harsh conditions, so they didn’t have a lot of time for reflection.

James adapted his style to their need. We should show the same flexibility. We should adapt how we approach an individual based on their need. That’s almost so self-evident that it could go without saying. But it offers a significant correction for how Christians often think of counseling and caring for one another.

We can often be prone to think there is a “Christian answer” (singular) for each life struggle. We want to know the biblical answer to our question and assume if we communicate that, we’ll be effective.

If we pay attention as we explore this book, we’ll see that the person we’re speaking to and the context they’re in should shape our approach. There are some things that are universally true, but universal truths without contextualization become cliché, rushed, and impersonal. They’re no less true, but they can be much less helpful.

Use your sanctified imagination. Consider whether James spoke to his house church with the same tone and approach as he wrote this letter. It seems unlikely.

The differences in these situations call for different approaches in how James would pastor and counsel them.

We should notice how much listening is implied in this letter. Each topic James addressed was a hardship he had heard about, empathized with, wept over, prayed for, and explored in a conversation. James couldn’t have written a letter with this degree of specificity if he hadn’t. This book is a “final draft” response to many conversations. In counseling language, this letter is the case summary; not the session-by-session dialogue.

As we explore the book together, let’s not just copy-paste these answers to our friends. That’s lazy counseling, even if its biblical. Let’s see how these timeless truths were contextualized to particular situations and then ministered through valued relationships.

Approaching the book of James this way isn’t “less biblical.” It is actually learning from every point in the process of inspiration – hardship that prompted this book to be written, the emotional and relational experience of recipients who received it, the pastoral relationship that facilitated it, and content of what was written – to be full orbed ambassadors (II Cor. 5:20) of the hope the book of James conveys.

With this approach we’ll realize that the effectiveness of the Bible to address the hardships we face isn’t just contained in the words written on the page. The effectiveness of the Bible also involves the context of relationships the Bible creates – the church. The Bible isn’t just a book of theological truths and instruction for godly living. The Bible is a book that birthed the church, a context of relationships that are vital to experiencing the full redemptive impact of the truths it contains.

[1] For more on this, see: https://bradhambrick.com/angrywithgod01.

[2] For guidance on being a more empathetic listener, see: https://bradhambrick.com/pastorascounselor4.