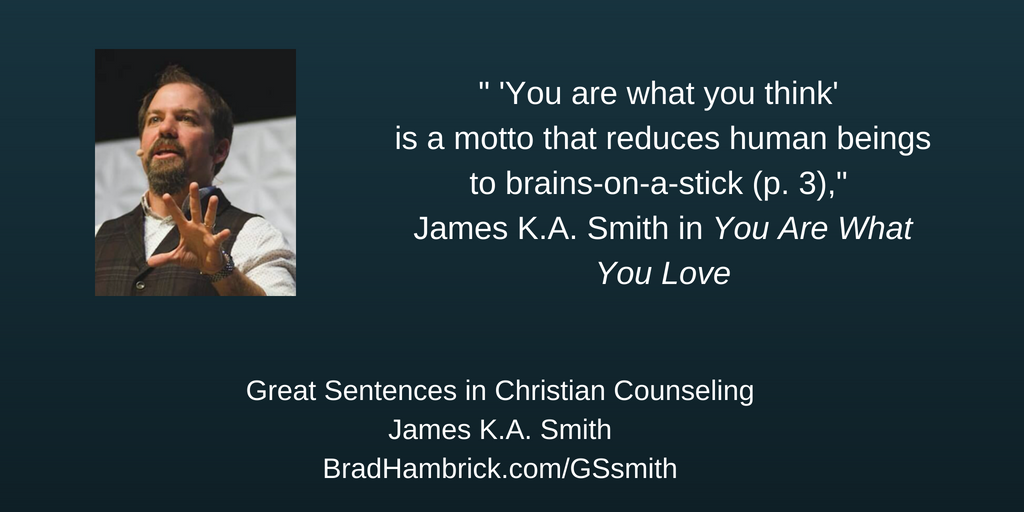 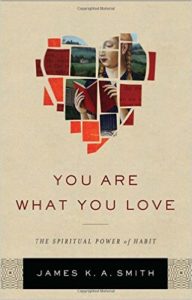 “‘You are what you think’ is a motto that reduces human beings to brains-on-a-stick (p. 3),” James K.A. Smith in You Are What You Love

Why don’t right thoughts led to good lives? This is a vexing question for a counselor. “What should this counselee be thinking about their situation?” was a driving question for me early in my counseling experience. Especially as a biblical counselor for whom teaching has a prominent role in our therapeutic model, the idea of right thinking leading to right living was strong.

If this is true (and from both my personal and counseling experience, it is), then an intellectually driven counseling model will only serve a portion of the population – those whose life struggles are rooted in ignorance.

Smith moves us to ask, “How are my life rhythms (liturgies is his word for this) set up to perpetuate how I’m living?” Smith does a masterful job of showing how our personal and cultural life practices are no less “liturgies” (orders of service focusing on our attention on an object of worship) than a Sunday morning church service.

Trying to change your life by changing your thoughts when your personal life rhythms (liturgies) remain the same is like trying to swim against the current in the ocean. You may put forth great effort. You may learn better form and get stronger. You may make progress for a time. But eventually the momentum of the ocean / liturgies will win.

This challenged a basic notion of biblical counseling I had not considered since my seminary training. I had just continued to assume it was always the best/biblical approach. Namely, that change progressed from heart to head to hands; from allegiances to beliefs to actions. This seemed like the purest way to pursue sanctification-focused change. Often it was very effective. But sometimes it wasn’t and as I read You Are What You Love, I thought I began to see why.

I began to see why for many people change would be more effective if it moved from hands to head to heart; from daily practices to guiding assumptions to core allegiances. Especially for counselees for whom self-reflection and principle-based decision making was not a strength this approach was more effective. To use Psalm 34:8 as an example, these counselees were more likely to “taste and see” (life rhythm activity) in order to arrive at the conclusion “the Lord is good” (belief) than vice versa.

I came across James K.A. Smith’s writings about the same time I was also reading Carlo DiClemente on levels of motivation for change. Both were challenging the same notion; we cannot intellectually master the process of change. Smith sought to debunk this notion in theological and philosophical terms. DiClemente’s efforts were much more practical.

Between these two authors I felt like I gained two new set of tools to work with counselees who were not ready or able to grapple with their life struggle in a primarily cognitive manner.

These were exciting areas of growth for me. As a counselor, I want to be as effective as I can be in helping people overcome their various life struggles for the glory of God. I had fallen into the habit of using the counseling tools I was comfortable with by default. That means I was effective with those for whom that predominantly cognitive (heart-head-hands) approach was effective, and less so when it was not.

James K.A. Smith gave me a theological and philosophical basis for seeing how a reverse approach (hands-head-heart) could be biblical. Carlo DiClemente gave me practical tools and categories to more effectively engage with low motivation counselees in order to garner more buy-in to whatever approach would serve them best. I am grateful to have learned how to serve people better by not treating then as mere “brains on a stick.”