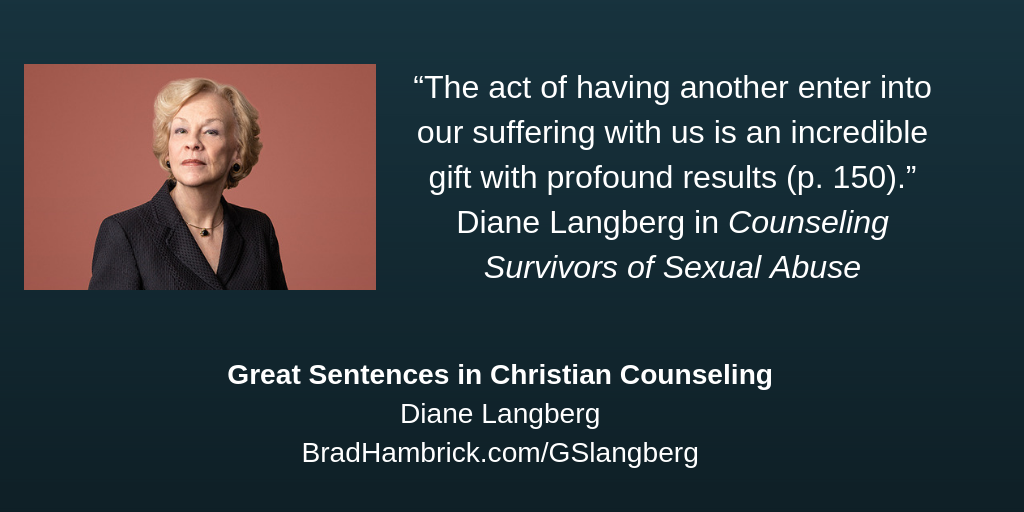 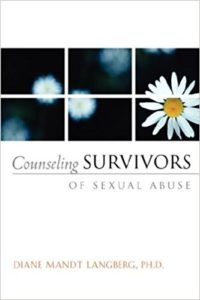 “The act of having another enter into our suffering with us is an incredible gift with profound results (p. 150).” Diane Langberg in Counseling Survivors of Sexual Abuse

I can remember attending a CCEF conference and attending a breakout session by Diane Langberg where she was speaking on counseling survivors of sexual abuse. Honestly, I can’t remember much of what she said. But about 15 minutes into the presentation I can remember be struck by the thought, “This is what counseling survivors of sexual abuse ought to sound like.”

Diane was informed. She could describe the traumatic aftermath of being abused in a way that did not place the burden or articulation on the victim. I could remember asking questions that revealed my ignorance, not realizing that this created a sense of “even your counselor doesn’t understand your experience.”

Diane was bold without being angry. There was an indignation that clearly communicated that what happened was wrong without raising the emotional temperature of the room in a way that would add to a sense of feeling unsafe.

Diane was safe. She could talk about damaging and shameful things in a way that was not pressuring and didn’t create a sense of being rushed to make a decision the victim was not ready to make.

In this way, Diane was hopeful but not very directive. This combination of qualities was new to me. In my counseling experience, hope was generated by creating a clear path towards a better future. In the aftermath of abuse, there often are not clear paths to a better future; trying to create one comes across as Pollyanna or utopian. It reveals how much the counselor “just doesn’t get it.” There is hope, but it is hope that often has to travel through hardship.

From this conference breakout, I realized I had found an approach to counseling that I wanted to learn more about so I picked up several of Diane’s book. That is when I came across this sentence that has stood out to me.

The role of the prophet is to declare “thus says the Lord” and give directives to “stop doing things that dishonor God, repent, and embrace a lifestyle that honors God.” This was the majority approach of my early training and experience in counseling. I believe it is good and useful. A moral life of integrity is vital to human flourishing and therefore character formation has a significant role in counseling.

The role of the priest is to identify with the people God wants to redeem or restore, enter into their experience, and model what a faith-filled response to their circumstance looks like. This is the ministry of Jesus spoken of in Hebrews chapters 2 and 4. This was an approach to counseling I did not feel well versed in. Honestly, because it was non-directive, I was suspicious of it at first. But hearing it modeled in Diane, I came to see its benefits and, as I have used it, have found it to be immensely effective with individuals who are responding to suffering.

I don’t believe there is an either-or choice between counseling as prophet and counseling as priest. Christ took both roles and, as his ambassadors, we should be therapeutically ambidextrous enough to relate to those we serve in whichever mode best serves God’s redemptive agenda in their life. I am grateful for Diane’s teaching and writing to help me become more holistic in what it means to be a good ambassador of Christ in counseling.