Great Sentences in Christian Counseling: Eric Johnson on Levels of Appeal in Counseling 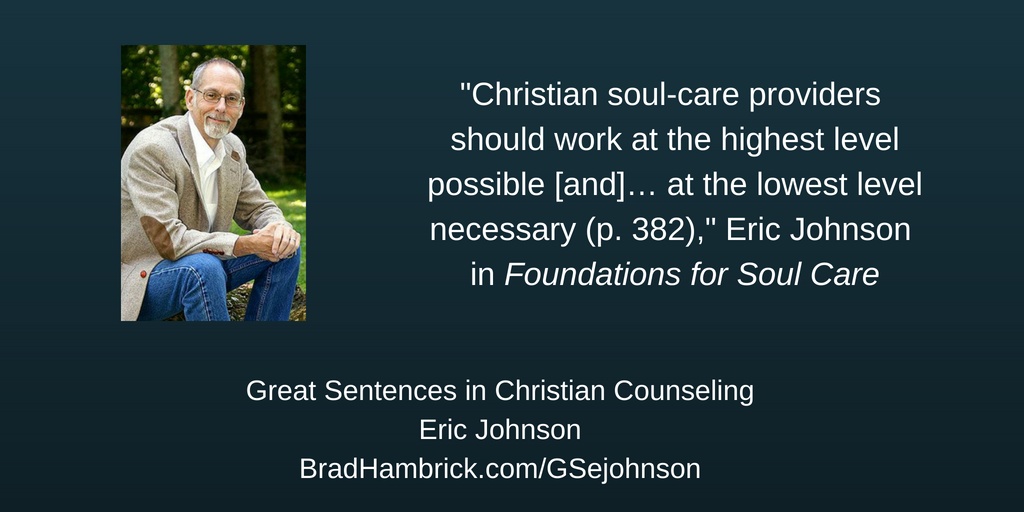 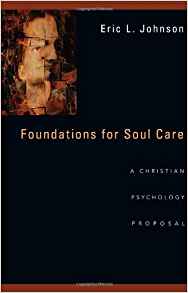 “Christian soul-care providers should work at the highest level possible [and]… at the lowest level necessary (p. 382),” Eric Johnson in Foundations for Soul Care

I cut my teeth in ministry in the parachurch setting. This means that people came to see me more as “counselor” than “pastor.” This also meant that those coming to me for help wanted varying degrees of Christian-overtness in their counseling; some wanted to be discipled through their struggle, others simply wanted relief from their struggle and didn’t care how much Jesus or the Bible was a part of the conversation.

I remember one couple who called to inquire about a first appointment.  The wife’s opening question was, “How Christian is this counseling going to be?” It was clear she had been hurt by someone representing Christ and she was cautious. But she had heard good things about our ministry and wasn’t sure where else to go.

“My training is seminary-based and I want to honor the Bible in everything I say and do as I care for people.  But my initial goal in each new counseling case is to get to know the person or couple well and make sure they feel understood. You are always free use or not use anything I recommend,” was my reply. She and her husband decided to make an appointment.

It was a messy situation and they were a fun kind of feisty (they enjoyed having a little flair in their “disagreements”). Both spouses had been unfaithful, the second as a retaliation affair. Neither was a Christian, but both were open to discussing biblical principles in our conversations as long as it seemed practical and helpful (and like they weren’t being forced to make choices that were disingenuous).

They saw a great deal of progress in their marriage. They matured in how they expressed their pain and in how they heard their spouse’s pain. They learned to communicate better and matured in their response to disappointments. But we kept getting stuck on the issue of forgiveness. Forgiveness wasn’t fair, it wasn’t deserved, and it made both of them mad to think about forgiving the other. Most of our conversations up to this point had been more pragmatic (dealing with the logistical-emotional mess) than devotional (asking questions about God’s role in their restoration; martially or personally).

Forgiveness was the subject on which we turned that corner. I said, “This is why I do Christian counseling. I believe we all come to issues like forgiveness that aren’t fair and require more than we have to give.” The movie The Passion of the Christ had just come out in theatres, so I said, “If you’re open to it, I’d like to suggest a date for the two you. It’s been a while since you’ve been on a date and you need one. I want you to go see The Passion of the Christ. That movie portrays how unfair I believe forgiveness is. What Jesus does in that movie is what I believe my sin and your sin deserves. Because you haven’t embraced what Jesus did, the two of you are trying to do for one another what Christ has already done for each of you.”

They went to the movie. We talked about it. I shared the gospel. They never came to faith (as far as I know). We continued to counsel. Their marriage continued to improve. Counseling concluded. I wasn’t sure if I had been a good biblical counselor or not. I was conflicted. I used the Bible. I shared the gospel. My counselees trusted me. Their life and marriage improved. But they, as far as I could tell, rejected (at least, declined to embrace) the central premise of Christianity.

I never quite knew what to make of this story. Then I was reading Eric Johnson’s Foundations of Soul Care and came across the sentence above and thought, “That is what I was doing with those couples.”

I wanted to appeal to this couple “at the highest level possible;” that is appeal to their ultimate need for Christ and how the mess in their life was evidence of lives built on false foundations. Most of our conversations, except for the excerpt above, were focused on “the lowest level necessary;” wading through a lot of messy pain with not much more than a Proverbs approach to Bible (wisdom principles; Jesus as great teacher more than Savior). Appealing at the “lowest level necessary” eventually gave me an opportunity to eventually appeal at “the highest level possible,” but not much came of it.

When I read Eric Johnson’s work I had words for what I had been doing. I could state in principle form what I had been doing by sheer ministry instinct. My desire was to counsel at “the highest level possible.” I set up my parachurch practice to allow every opportunity to do so. Yet, the nature of my setting – meeting by appointment with people who were not members of a congregation for which I served as pastor – meant I often had to appeal at “the lowest level necessary” in order to (a) win the trust of the counselee personally and (b) demonstrate the practicality of Scripture for someone for whom this was not the preliminary assumption.

I began to realize the principle in Eric Johnson’s book was merely the practical application of I Corinthians 3:6-8, “[Paul] planted, Apollos watered, but God gave the growth. So neither he who plants nor he who waters is anything, but only God who gives the growth. He who plants and he who waters are one, and each will receive his wages according to his labor.”