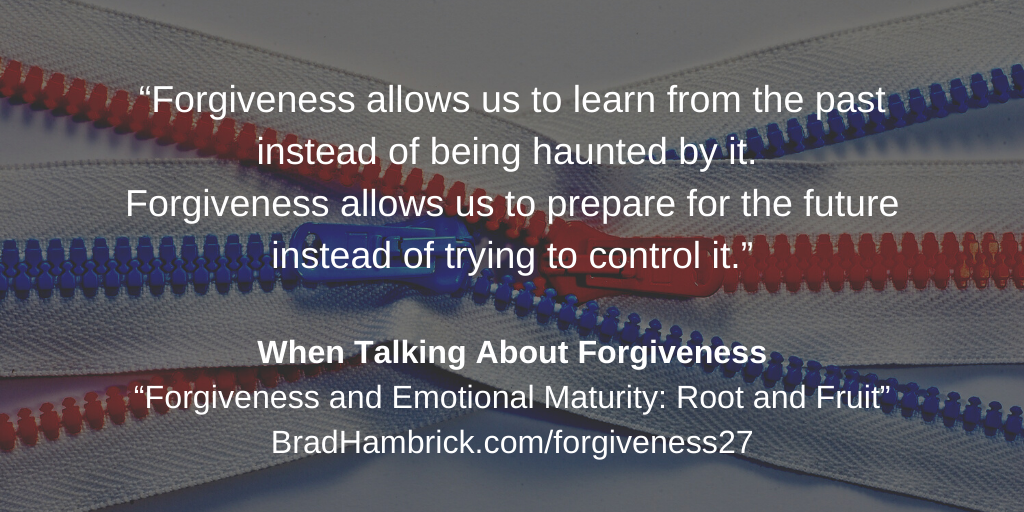 We are culminating our journey through forgiveness with this reflection. Our goal is to be as concrete in our description of closure as we can be. But closure is more a theatre term than a good fit describing the final stage of forgiveness.[1] A drama can have a “closing act” but forgiveness doesn’t end anything. Both the forgiver and forgiven live on after forgiveness. That is why we will use the term “maturity” to capture what we’re after.

The metaphor of maturity helps us understand the journey of forgiveness more accurately. We are all always maturing. Even the wisest are always growing and understanding things better. Once a door is closed, it remains closed unless someone decides to open it again (which if applied to forgiveness, would be described as bitterness). We need a metaphor that allows for perpetual growth.

If we look at a six-year-old who is trying to process his parent’s divorce and say, “He is just not mature enough to understand what is going on,” we are not criticizing the child. We are acknowledging where he is. We are not rushing him. We are naming a challenge. But if the child grows up to be a 42-year-old man who mismanages his finances and say, “He has never matured,” we are making a moral assessment.

The concept of maturity allows us to assess both what is hard about forgiveness (suffering) and bad about unforgiveness (sin). The concept has the elasticity to flex with where someone is on their journey with the pain that has been inflicted upon him.

We also want to avoid a bad habit of many books. We don’t want to reduce life to our subject of discussion. Forgiveness is only one part of the maturational journey God has us on. Our goal here is simply to accurately describe the role forgiveness plays in the maturational process. Forgiveness is not the totality of emotional maturity, but it is an important piece. We want to understand its role better.

Forgiveness as the Root of Maturity

When the roots of a plant are not healthy, the plant will not thrive. The plant does not get what it needs in order to continue to grow, mature, and produce fruit. The better we understand how unforgiveness impairs the roots of emotional maturity, the more motivated and equipped we will be to persevere in the difficult journey of forgiveness.

The time you have invested in this series of reflections, is time that you have reclaimed for your own emotional health and maturity. In the same way that a plant needs minerals and nutrients, our emotional maturity needs the concepts and categories to aid us in responding to the hardships of life in healthy and God-honoring ways.

Second, unforgiveness locks us in the past. Unforgiveness doesn’t just absorb time, it also diverts our focus. We become so consumed and disoriented by what happened that we can’t give our fully attention to what is happening now.

Perhaps you remember being a student taking a test and fearing you would do poorly on. Your fear sped you up. You didn’t take the time to read the directions well, so you missed questions you knew the answer to. That is a parallel to the distraction of unforgiveness.

The mature you would say, “Take your time. Read the directions carefully.” Even as a student, you probably knew this. But the emotional disruption of fear had you so locked in the future (i.e., receiving a bad grade), you couldn’t stay grounded in the present. Unforgiveness does the same kind of thing with the past.

Third, unforgiveness skews our judgement. Unforgiveness is more than an emotional experience. It is a way of interpreting the world. Even when you’re in the present, the people and situations around you become skewed by the unresolved hurt that you feel.

To use another image, imagine you severely jammed your thumb. Someone tries to hand you a gallon of milk (an innocent gesture). You respond with fear and/or anger. The unresolved physical pain changed how you interpreted that action. Unforgiveness does the same kind of thing emotionally and relationally.

Maturity as the Fruit of Forgiveness

First, forgiveness shows that our values have matured. Let’s take the worst-case scenario first. Let’s assume the person who offended us is still dangerous. Forgiveness and wise trust (which in this case would involve social distance) means that we have returned to making the choices that are best for our life instead of living in response to the other person. Forgiveness frees us to be intentional rather than reactive.

Second, forgiveness frees us to live in the present. We’ve all heard and probably given the advice, “Wherever you are, be all there.” It’s good advice. But it’s hard to follow. Forgiveness is a key part of our emotional hygiene that puts us in a position to live according to this principle.

Third, forgiveness removes the lens of pain. The more we forgive, the better we can see, “I can see clearly now the pain is gone. I can see all the obstacles in my way. Gone are the dark clouds that had me blind.”[2] The fact that these are lyrics to such an iconic song shows how universal the experience of pain clouding our judgement is.

The Bible uses the metaphor of a race with obstacles to describe life (Hebrews 12:1). The person who can see most clearly is the person who will navigate this race best. Removing the missteps we make because of generalized mistrust or leaking anger tripping us up is a key marker that we are maturing in how we are running the race of life. We regain the freedom to respond to each moment on its own terms.

As we conclude this journey through forgiveness together, I would leave you with one word – persevere. None of us do forgiveness perfectly. Anyone who wrestled through this material honestly, sees areas they need to grow (myself included). Don’t get overwhelmed by how far the destination may seem. Be faithful in taking the next step. Remain confident that God is for you and with you on this journey. Use this resource to invite a few friends with you along the way and help them understand what makes the terrain hard.

Thank you for allowing me to walk a piece of this journey with you.

[1] Please do not hear this as a criticism of the term “closure.” I just find that the term over promises and under delivers on the experience many (perhaps most) people have after forgiving a major offense. If the term “closure” works for you, don’t feel compelled to change it.

[2] I took the liberty of changing the word “rain” to “pain” in Johnny Nash’s song “I Can See Clearly Now.”