Forgiveness and Leaving Room for the Wrath of God 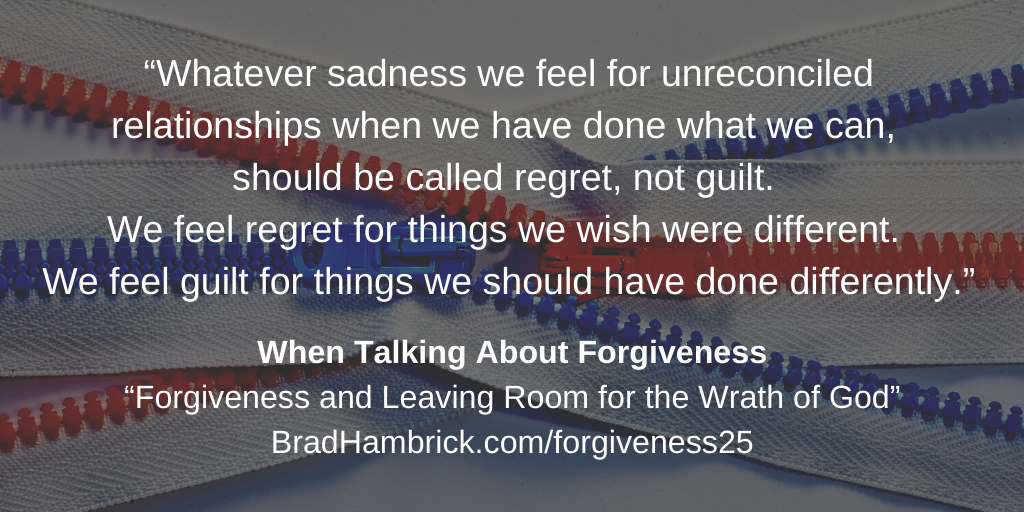 Most books and articles written on forgiveness focus on Romans 12:17-18, “Repay no one evil for evil, but give thought to do what is honorable in the sight of all. If possible, so far as it depends on you, live peaceably with all,” more than they do Romans 12:19, “Beloved, never avenge yourselves, but leave it to the wrath of God, for it is written, ‘Vengeance is mine, I will repay, says the Lord.’”

That is unfortunate. When this happens, we are not availing ourselves to the whole counsel of God and, thereby, neglecting to give adequate guidance for instances when as “far as it depends on you” does not result in adequate resolution. As we continue in the closure section of this series of reflections, we must ask, “What do we do when our best efforts to forgive still result in a dangerous or unresolved situation?”

I am glad the Bible addresses this question. It is an awkward subject. But it is good and needed. God’s people would be unnecessarily vulnerable if the Bible did not. We need to be grateful for truths that help us navigate uncomfortable situations, even when the application of those truths do not make the situation pleasant.

We begin by acknowledging our best efforts are not enough, by themselves, to create reconciliation. We are only responsible for what we can control, hence Paul says, “so far as it depends as you.” Whatever sadness we feel for unreconciled relationships when we have done what we can, should be called regret, not guilt. We feel regret for things we wish were different. We feel guilt for things we should have done differently.

Whatever sadness we feel for unreconciled relationships when we have done what we can, should be called regret, not guilt. Click To Tweet

Next Paul recognizes the natural human impulse in these situations. When our efforts are inadequate to get what we want, we tend to lash out. This is why Paul says, “Never avenge yourselves.” He knows us. If we are in an abusive situation, a counter-aggressive response would be dangerous. In a non-abusive situation, vengeful responses are just ineffective and allow us to become a distraction from the real problem.

Finally, we come to the key phrase for this reflection, “But leave it to the wrath of God.” At first, this might come across as the mother saying to defiant children, “Just wait until your father gets home.” If Paul were writing to the unrepentant person, that would be the effect. But Paul isn’t writing to the proverbial defiant children. Paul is writing to the, metaphorically speaking, exasperated mother who is at her wits end and doesn’t know what else to do or say.

Let’s summarize how far we’ve come in this passage.

We begin to realize several things. First, to get to the point that verse 19 describes, we must really love the person who hurt us. Casual relationships and minor offenses don’t carry the emotional weight to make this full journey. Second, that means that by the time we get to verse 19 in practice we are more sad than mad. It is grief that causes us not to take this last step (verse 19b). Third, we don’t want to “give up” on the person, so we are tempted to try to “force change.”

So, we are left with at least three questions:

When have I done all I can?

It always feels like we can give a little bit more. Once we’ve moved the line of what we are willing to accept two miles, what is another three feet? If Jesus gave his life for me, what is another $200 to my addicted friend? Why did I believe the last dozen tearful apologies and not this one too?

The first recommendation here is, don’t make these kinds of decisions alone (Proverbs 11:14). Get input from people whose character you trust and people who know the type of offense you’re dealing with well. You want to identify when you are enabling destructive behavior in the other person.[1] Using a visual illustration, you want to identify when your gracious response is on “Step 18” of forgiveness and the other person is refusing to take “Step 2” of repentance and change.

We begin to see that “doing all you can” doesn’t mean “you can’t do more.” It means “you’ve done enough to prove that this person is not committed to repentance and change.” Think of it like pulling the starter rope on a lawn mower. You do not have to pull until your arm falls off to have done “all you can.” There comes a point where you have pulled enough to know that pulling again is not going to make a difference. The problem is something other than the force and repetition of your pulls. You don’t have to dislocate your shoulder to prove the point.

What if the offender is dangerous, or the offense is illegal?

This is the question Paul answers in Romans 13:1-6.[2] In summary, Paul says, “This is why God instituted the legal system and civil authorities.” When people do dangerous and illegal stuff, the godly response we have is to call the police. When people are abusive, it is godly to get a restraining order.

But many people ask, “Isn’t that punitive instead of loving?” The answer is, “No.” It is loving in two ways. First, it limits the amount of damage this person can do – to themselves, their reputation, and others. Second, it is an attempt to wake them up to the severity of their actions.

What if the offender is safe, and the offense is only immoral?

This is the question Paul answers in Romans 12:20-21. In effect, he says, “Don’t get so caught up in being right that you can’t be nice.” Verse 19 clarified that being “nice” doesn’t mean being “naïve.” But you do treat them with the basic kindness of a stranger in need. Paul’s example was offering food to someone who was hungry.

What good does this do? Paul says it is like heaping burning coals on their head, which was an ancient metaphor for waking someone up. I, for one, am grateful for just an alarm clock.

If we are cruel or indifferent to the person we are “leaving to God,” then our apathy can be used by them to justify their obstinance. But our casual kindness, undermines this excuse without putting us in a place of continued vulnerability. Removing the excuse that we’re being “mean” or “heartless” is an effort (not guarantee) to “wake them up” to their need to change.

We must accept the reality that our best efforts at restoration will not always result in restoration. When this is the case, we must have the loving courage and resolve to “leave them to God.” Which, in light of earlier portions of this series means only doing what wise trust allows while being casually kind.

[1] For more guidance on how to identify and avoid enabling behaviors, see bradhambrick.com/10keyshelping.