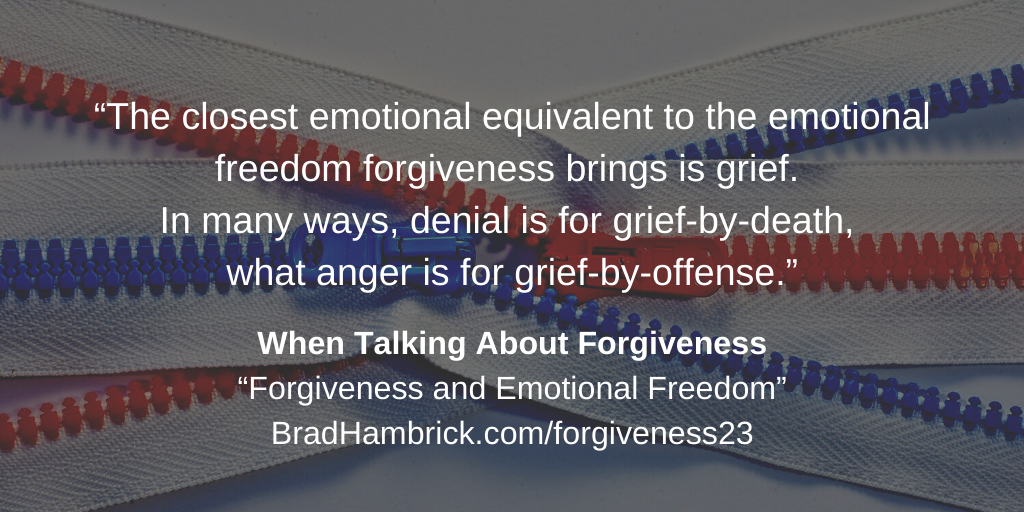 We are nearing the end of our reflections on forgiveness. This means the themes we’ll be discussing have the flavor of “closure” to them. These final reflections assume the journey described in previous reflections. If you find yourself saying, “I can’t do that,” to these final thoughts, add the word, “yet,” to the end of the sentence. Don’t feel rushed. Continue your journey from where you are.

With that in mind, we will consider five ways that forgiveness and emotional freedom inter-relate.

First, think of freedom as existing on a spectrum rather than being all-or-nothing.

As you gauge your growth towards emotional freedom, don’t just measure it against where you would like to be and be discouraged because “you’re not there yet.” Also measure your growth from where you were and be encouraged by the progress already made. Both measures are needed; progress made and progress to be made.

Emotional growth tends to occur like physical growth. You don’t always notice it’s happening until you’re surprised by how much it has happened. Every day feels about the same until you visit your grandparents and they marvel at how much you’ve grown. You don’t feel yourself getting emotionally stronger until something happens that puts your growth on display.

Here we face the reality that non-forgiveness is more noticeable than forgiveness. Anger and despair catch more attention than a proportional response. You will have to be intentional to notice the growth in emotional freedom that forgiveness brings. The next three points about emotional freedom provides examples of what you might notice.

Before we forgive, the offense against us is central in our emotions. Practically, this means that a large number of events remind us of the offense. That is how memory works: association. I smell fresh cut grass, and I remember a baseball field because I associate that smell with that place. After the memory of baseball is activated, then memories of specific teammates or games come to mind.

It is hard to dis-associate things from memories. But we can de-centralize experiences. Now that I am a homeowner and a father, fresh cut grass is associated with chores and playing in the yard. Baseball is less central to my life, so the association is weaker (less central). Memories of baseball come to mind after memories of backyard camping.

Forgiveness means Christ’s payment for sin is more central to how we remember our pain. When we remember a debt, we either remember it as “unpaid” or “paid.” When we say, “I forgive you,” we are declaring that relational debt “paid” by Christ on that person’s behalf. There is emotional freedom in no longer tracking a debt. But that is not the totality of our relationship with this person or their offense. To revisit the financial metaphor we’ve alluded to several times, continuing in relationship is to continue to “do business together” so there is still a metaphorical “line of credit” between us.

Wise trust means that this person’s repentance is more central. Forgiveness gets the person from indebted to break even. That gives enough emotional freedom to begin living in the present moment. Then, as the fruit of repentance emerge, wise trust allows us to more fully live in the present.

In many ways, living fully in the present is what allows children to play. We marvel at their innocence and get jealous that “they don’t have a care in the world.” While adult responsibilities may not restore that childlike innocence, forgiveness gives us emotional freedom by allowing us to increasingly live in the present moment.

Third, freedom means responding to new events on their own merit.

Imagine a friend lied to you. You rightly feel hurt. Chances are you don’t just mistrust that friend, you also started to weigh the words of others more carefully. Part of the emotional load is the mistrust towards the friend who lied, but an equal (if not heavier) part of the load is a more generalized mistrust.

Forgiveness allows you to remove the lens of mistrust from the rest of life and other relationships. As a result of being hurt, we will be less innocent than we were before. But “less innocent” does not have to mean “mistrusting.” We can be wisely cautious without being generally suspicious.

Let’s use the example of children again. A child may innocently do a belly flop the first time they jump off a diving board. It hurts. Initially, the child mistrusts the water, diving boards, lifeguards, and everything else related to a swimming pool. Well processed, this experience teaches the child to be wise about how he/she enters the water. But being “less innocent” doesn’t mean the inability to enjoy swimming or diving. This takes us to our next point.

One side effect of unforgiveness is a constriction in the number of emotional and relational risks we are willing to take. Click To Tweet

Forgiveness is what allows us to enter this next phase of growth. It is this growth that often allows us to look back on significant hurt and say, “I am a stronger person for having gone through that.” Too often that phrase is equated with, “What doesn’t kill us makes us stronger,” which is too generic and aloof. When we can identify and articulate the growth that occurred, it allows us to see the good thing God did during a hard time and, thereby, have our trust in God grown as well.

Fifth, the closest emotional equivalent to the emotional freedom forgiveness brings is grief.

We return to where we started – the reality that freedom doesn’t always feel good. In this case, freedom feels like grief. Grief is when we accept that an unwanted thing has happened (for traditional grief, a death), and quit fighting against that reality. In many ways, denial is for grief-by-death, what anger is for grief-by-offense.

Continuing the parallel, when you have grieved the death of a loved one, you still feel sad at times – perhaps the anniversary of their passing, birthday, or Christmas when their seat at the table is empty. But this sadness doesn’t control you and it doesn’t derail your ability to healthily engage the moment. You have assimilated their passing into your story, and you are continuing to live your story.

That is a good parallel for forgiveness. After you forgive, you still feel hurt at times. But this sense of hurt doesn’t control you. You learn to healthily engage life even with the episodic distraction of feeling hurt. You assimilate the hurtful event(s) into your story and live the rest of your life without that event(s) having a controlling influence over your choices. That is what it means to be free.