The Offensiveness of God Forgiving Sins Against Me 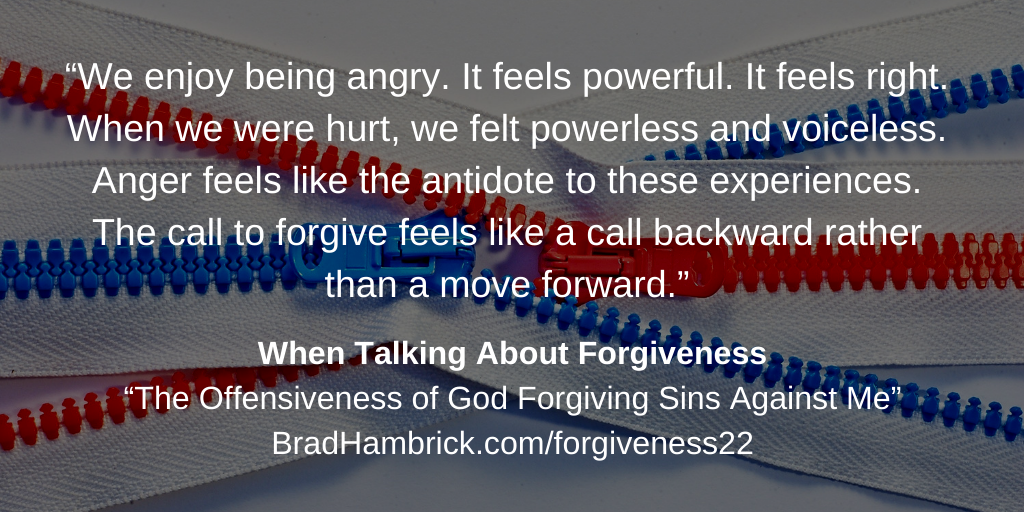 I remember when I mindlessly thought that because forgiveness was “nice” and “good” that it must be “pleasant” and couldn’t be “hurtful.” I remember the blissfulness of that ignorance. The world was a simpler place then. You may have a similar sense of reminiscence now that you are this far into this series.

The first was being a counselor. Counselors spend their workweek hearing stories of advanced brokenness, stories of abuse, trauma, and betrayal. Neat answers don’t fit these jagged situations. There was no reasonable assurance that “if you do what you’re supposed to do” the other person will follow suit. There was a need to add cautious wisdom to the virtue of forgiveness. But was that okay?

The second was re-reading Mere Christianity by C.S. Lewis, after several years of being a counselor, and coming across this quote.

“Yet this is what Jesus did. He told people that their sins were forgiven, and never waited to consult all the other people whom their sins had undoubtedly injured. He unhesitantly behaved as if He was the party chiefly concerned, the person chiefly offended in all offenses. This makes sense only if He really is the God whose laws are broken and whose love is wounded in every sin (p. 51-52).” Mere Christianity by C.S. Lewis

What C.S. Lewis did best was ask the Christian faith to answer real questions. He put uncomfortable things into words. He made them acceptable to talk about. He wasn’t a rebel or irreverent. He was just honest and vulnerable. If God was real and the Bible was true, he thought it was fair to ask honest questions. That was the permission I needed. If reading this series of reflections provides that experience for you, I would be honored to have served that role.

With that in mind, let’s engage another awkward topic about forgiveness. Imagine you and a friend were robbed by the same thief. Perhaps you were together at the State Fair and were robbed at the same time. The thief was caught and brought before you. Your friend speaks first and says, “We forgive you.” As counselors are prone to ask, how does that make you feel?

Chances are, you’re offended. I would be too. Even if you were willing to forgive, you don’t like someone speaking for you. I don’t either. More than a loss of voice, it doesn’t seem right for someone else to forgive on your behalf. It wouldn’t matter if the thief stole twice as much from your friend. Your debt wasn’t their debt to cancel. So, we ask, is that what God does when he forgives sins that also offended us?

The answer is “yes” and “no.” I know, that’s why counselors get on your nerves. But hear me out. Yes, God forgives the sins committed against me without my consent. I can choose not to forgive and the person who offended me get into heaven and have emotional rest in their standing before God.

No, God does not forgive for me (meaning, in my place or usurping my voice). The possibility exists for God to cancel the debt towards him, and I do not cancel the debt towards me. In which case, God warns me about not understanding the extent to which I have been forgiven (Matthew 18:21-35). By being an example, Jesus does create social pressure for those who want to associate with him; that is, call themselves Christians.

This is where we get uncomfortable. We feel rushed. But we’ve already discussed that God is a patient shepherd who walks at the pace of his sheep. We don’t like the predetermined direction. We want to be followers of Jesus; we just don’t want him to be “out front.”

Most of our resistance is that we do not want to be put in harm’s way by forgiving. In previous reflections, we’ve already talked through the progression of wise trust and that manipulative repentance does not fool God and reason to withhold any steps towards restoration. We’ve established that God is patient and forgiveness is a process.

This can all be true, but our heart still grumbles. Why? Because there is a degree of satisfaction in anger and bitterness. Often, these emotions feel like the only thing we have left to commemorate our pain. Releasing these emotions feels like erasing history, like tearing down a monument to a horrific event. Remember, you will always have healthy grief over these events, even when you surrender to anger.

Frederick Buechner comments on the satisfaction and effect of anger.

“Of the seven deadly sins, anger is probably the most fun. To lick your wounds, smack your lips over grievances long past, roll over your tongue the prospect of bitter confrontation still to come, to savor to the last toothsome morsel both the pain you are given and the pain you are giving back—is a feast fit for a king. The chief drawback is that what you are wolfing down is yourself. The skeleton at the feast is you.” Frederick Buechner in an untitled newsletter article[1]

As we move towards the tail end of our series, this is a reality that we must grapple with. Note, just because we are nearing the end of this series, does not mean you are at the same point on your journey. It is always easy for books and blog series to get ahead of people.

We must admit, we enjoy being angry. It feels powerful. It feels right. When we were hurt, we felt powerless and voiceless. Anger feels like the antidote to these experiences. The call to forgive feels like a call backward rather than a move forward. This is why it bothers us for Jesus to be out front.

We enjoy being angry. It feels powerful. It feels right. When we were hurt, we felt powerless and voiceless. Anger feels like the antidote to these experiences. The call to forgive feels like a call backward rather than a move forward. Click To Tweet

Regardless of how patient our Good Shepherd is, we must come to trust his direction and example. Early in our journey, it is enough to know that he is patient and understands. “Actions” towards forgiveness feels a long way off. Once we get to the point where it feels reasonable for forgiveness to be imminent, we can begin to dislike Jesus’ example.

But like every other emotional challenge we’ve faced on this journey, our pattern remains the same. Namely, put what is hard into words so we can have an honest conversation with God and others so that honoring God is not something we have to do alone.

[1] As a note to any prospective writers if you are going to say something this well do not say it in an unpublished newsletter. It makes it harder to give you credit.