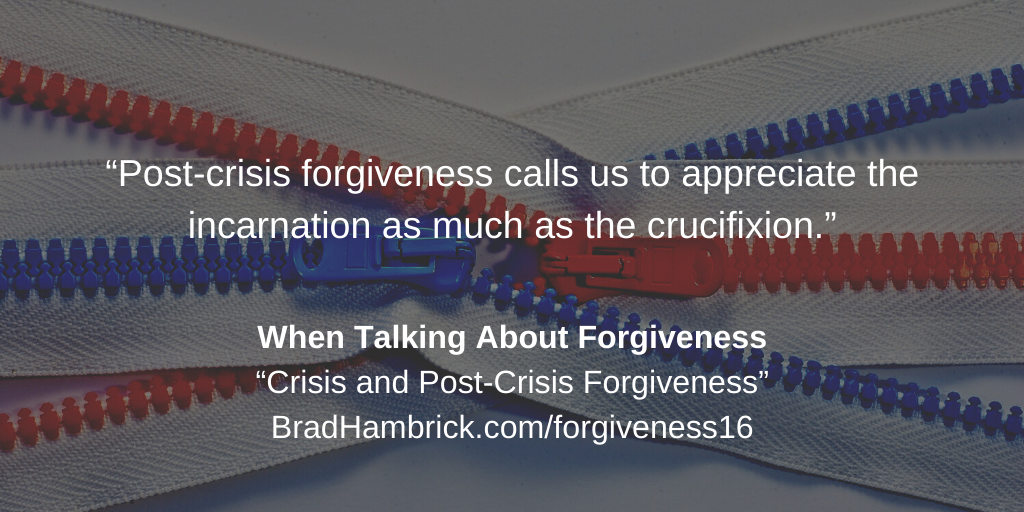 When we play these situations out in our mind, we rehearse the moment of discovery, the process of learning “how bad” the offense was, tense pre-forgiveness conversations as we express hurt, and finally getting to the place of saying, “I forgive you.” These all capture the crisis phase of forgiveness. During this time, alarms are blaring in our mind and hearts. Time is moving fast.

If our life was a movie, the words “I forgive you” would be the climax and the post-climactic part of the script would be relatively short. Oh, that life was a movie. Forgiving is hard. Something we wonder if we will ever be able to do. But post-crisis forgiveness is hard – by way of endurance – in a way that is very comparable to the intensity of crisis phase forgiveness.

In the time after saying “I forgive you,” we battle with fear, anger, mistrust, shame, and intrusive thoughts. Forgiving was so daunting, we thought finally doing it would make our life easier. But then we realize, after an initial time of relief, post-crisis forgiveness is just a different kind of heavy.

Crisis forgiveness was, in many ways, easier. It was heroic. It was focused. It forced us to our knees in reliance upon God’s strength. Post-crisis forgiveness comes when we are grace-weary. It is mundane. It must cover a multitude of (comparably smaller) sins, not just one big sin. It can easily be distracted by so many things we are trying to catch up on (which we neglected during the crisis phase).

During post-crisis forgiveness, we offend (even if, in lesser ways) the person whom we forgave, we are now the one to repent. Everyday irritants call for patience and grace, but we feel like we have been gracious and patient enough. Our spouse, child, or friend offends us again – perhaps forgetting to follow through on a commitment – and we are called to relate to them independent of the original offense.

Post-crisis forgiveness calls us to appreciate the incarnation as much as the crucifixion. Christ came and lived among us for over three decades filled with many ordinary days and common conflicts. Christ lived in the midst of our sin – a fallen broken world with selfish, manipulative, backstabbing friends – in addition to becoming sin for us (2 Cor. 5:21). Post-crisis forgiveness calls us to emulate Jesus incarnationally living with those whose sin he would forgive.

Too often we (the forgiver) assume that the restoration process will go directly from forgiveness to peace. This is reciprocal fallacy of the forgiven person who assumes they will move directly from forgiven to trusted. However, especially when the offense being forgiven profoundly disrupted life, there is a middle stage. If we forget this, we may wrongly assume that we have failed to forgive when we meet these new challenges. Rather, it means that we have moved to a new stage of restoration; from cancelling the debt to restoring trust.

Saying that there is sometimes a middle stage to restoration does not change the necessity or requirements of forgiveness. Nor does it allow the one being forgiven to rush or demand quicker restoration.  It does remind us that the Bible is more than a collection of commands. It is a portrait of our complete life experience captured in the person of Christ. With every struggle we face, we have the opportunity to marvel at a new feature of Jesus’ character and begin the process of emulating that quality.

Post-crisis forgiveness – which simply means walking out the implications of forgiveness in mundane moments and exhibiting grace during those moments – is a chance to appreciate the gritty, commonness of the humanity of Christ. To realize Jesus lived these moments perfectly too, both to redeem our shortcoming in these moments and as our example of honoring God in the midst of them.

Don’t let the new challenges of post-crisis forgiveness unsettle you. In many ways, this reflection has been an exercise like talking to a pre-teen about puberty. You don’t tell a pre-teen about the changes of puberty and then say, “Do it.” Education about puberty is not about execution. You have the conversation, so the young person is not unsettled by the changes and is comfortable talking to you about them.

That is the purpose of this reflection. We can’t make post-crisis forgiveness easy. We can raise awareness that it presents new challenges. We can open the conversation, so that when these new challenges emerge, you have words for it instead of getting upset that you or the other person is doing something wrong.