When Discussing Parables About Forgiveness 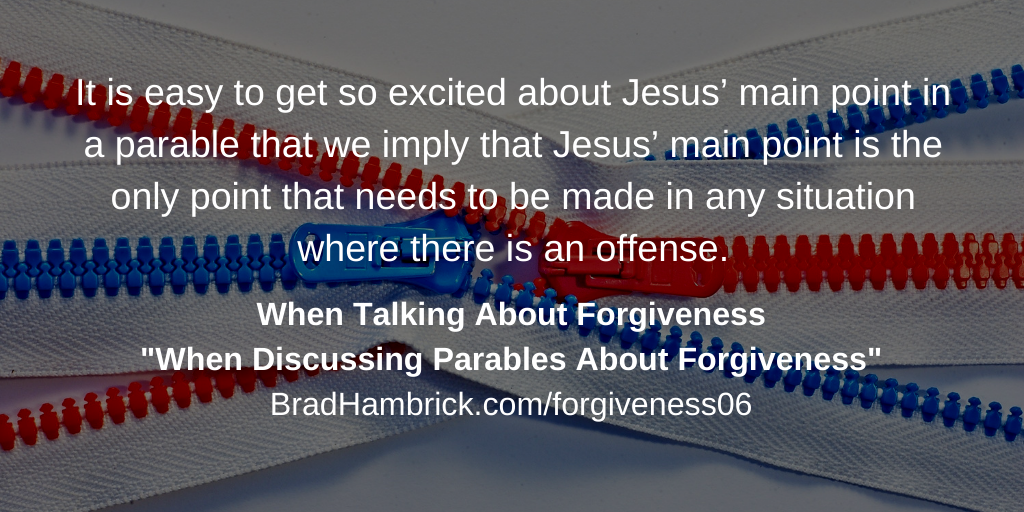 Take a moment and read the Parable of the Unforgiving Servant from Matthew 18:21-35. As you read the parable, ask yourself the question, “What is missing from this story?”

“Therefore the kingdom of heaven may be compared to a king who wished to settle accounts with his servants. When he began to settle, one was brought to him who owed him ten thousand talents. And since he could not pay, his master ordered him to be sold, with his wife and children and all that he had, and payment to be made. So the servant fell on his knees, imploring him, ‘Have patience with me, and I will pay you everything.’ And out of pity for him, the master of that servant released him and forgave him the debt. But when that same servant went out, he found one of his fellow servants who owed him a hundred denarii, and seizing him, he began to choke him, saying, ‘Pay what you owe.’ So his fellow servant fell down and pleaded with him, ‘Have patience with me, and I will pay you.’ He refused and went and put him in prison until he should pay the debt. When his fellow servants saw what had taken place, they were greatly distressed, and they went and reported to their master all that had taken place. Then his master summoned him and said to him, ‘You wicked servant! I forgave you all that debt because you pleaded with me. And should not you have had mercy on your fellow servant, as I had mercy on you?’ And in anger his master delivered him to the jailers, until he should pay all his debt. So also my heavenly Father will do to every one of you, if you do not forgive your brother from your heart.”

Remember, parables are fictional stories told to make a primary point. So, its not heretical for us to ask the question, “What is missing?” We’re not questioning Jesus. We’re considering, “As Jesus made his primary point, what deductions or applications might we make which would be unwarranted?” We are honoring Jesus’ primary point by not applying it in ways that are a bad fit.

That doesn’t mean there is anything wrong with Jesus’ parable. His point is that it is hypocritical for Christians not to forgive in light of what we’ve been forgiven. That’s true and we need to hear it. Jesus wasn’t trying to give us the skills to manage the social strife that emerges when people are trying to agree on who-did-what-wrong-when so that it’s clear who needs to forgive what.

That brings us to the point of this reflection. How do we use parables well when we’re talking about forgiveness? In navigating this question, we will make four points.

First, we make clear what the main point of the parable is.

In this parable, the main point is: it is hypocritical not to forgive when you realize how much you’ve been forgiven. In the Parable of the Prodigal Son, the main point is: after we’ve grown comfortable with our status of being forgiven it is easy to become self-righteous towards those in need of forgiveness.

To use a parable for a purpose other than Jesus’ purpose in telling it is to misuse the parable. Jesus chose the details of the story to serve his main point. We wouldn’t use the story of Goldilocks and the Three Bears to talk about wood working, cooking techniques, or sleep strategies. Details about chair construction, porridge, and beds are in the story to help make the main point: balance is better than extremes (i.e., too big, too small, just right; too hot, too cold, just right).

Second, we acknowledged what tangential elements are oversimplified to focus on that main point.

Parables leave out lots of important details for the purpose of highlighting the main point. Where were Goldilocks parents? How did Goldilocks pick the lock on the bear’s house? Did Smokey the Bear approve of the bear family having a fire in the forest to bake their porridge?

In the Parable of the Unforgiving Servant, there are many tangential questions that we would want to know if we were the pastor, counselor, or friend of one of the characters.

Because this is a parable, there are no answers to these questions. These people never existed. They were figments of Jesus’ imagination created to make a point about forgiveness.

But these kinds of questions are very relevant when we are seeking to help a friend think through how to navigate a broken relationship where forgiveness is relevant. That’s our next point.

Third, we acknowledge that things tangential to a parable’s point often are not tangential in life.

It is easy to get so excited about Jesus’ main point in a parable that we imply that Jesus’ main point is the only point that needs to be made in any situation where there is an offense. But if that were the case, Jesus would not have needed to tell so many parables.

Perhaps we just ask, “What details in your life don’t seem to match up with the details of Jesus’ parable?” Our friend might say, “The second servant acknowledged their debt and seemed to genuinely want to make it right. The person who hurt me won’t acknowledge what they did and claim I’m wrong for even bringing it up.”

When we are teaching on a parable in a public setting, we need to think through these kinds of details based on the examples we use.

Fourth, we do not invoke biblical authority on speculations regarding things tangential in the parable.

As we discover important questions not directly addressed in a parable, our friend (or audience) still needs guidance on those questions. We may find other biblical passages that speak directly to these questions. We may find biblical principles that help us discern the leading priorities that should guide decision making. We may realize some important decisions are left free for the individual to decide based on conscience and preference.

The principle behind this fourth point is that we want to avoid implying a given piece of advice has more biblical weight than it does when we’re talking about a parable. It is easy for someone to think that because a conversation or lesson began in a parable that everything we say has the backing of biblical authority.

That means we need to be willing to say things like, “Jesus’ point in this parable is that you need to forgive. But what we’ve been talking about is what level of trust is warranted given how little your friend will own how what they did. You being free from bitterness is one thing, but it doesn’t mean you aren’t hurt/frustrated by their resistance or that you need to put yourself in that position again. On those points, we’re brainstorming together and looking for other relevant biblical principles.”

When we have conversations about forgiveness this way, we honor Jesus’ intent for a parable and we honor our friend as we help them learn to trust the Bible to guide their life through difficult, messy situations.