5 Things Forgiveness Is Not 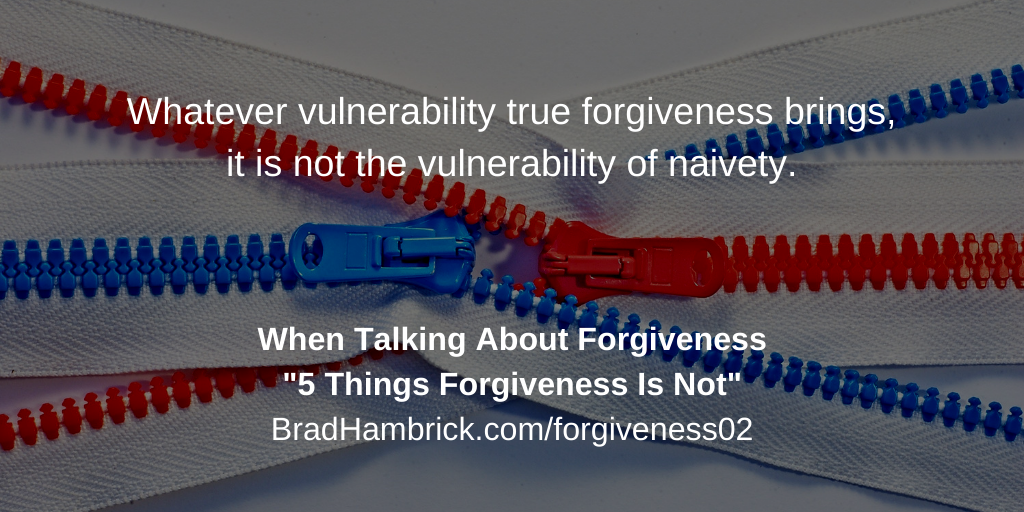 From the first reflection to the second, we’re going to move from pain to fear. Initially, we paused to honor the pain that prompted the need to forgive. Now we’ll seek to articulate several of the fears that can cause us to brace against forgiving.

Sometimes the most loving way to engage a subject (that is, a topic like forgiveness) is to set someone’s (that is, a person who has been hurt) mind at ease. With children, this might sound like, “You’ve got a doctor’s appointment today, but don’t worry, you don’t have to get any shots.” It is reasonable to associate doctors with needles, but it easier to go to the doctor if you know there won’t be any needles this time (even for my children’s father).

Similarly, it can be helpful to set our mind at ease about a few things related to forgiveness. This reflection is all about, “We need to talk about forgiveness, but don’t worry, forgiveness doesn’t mean [blank].” We are going to talk about five common fears associated with forgiveness that can go in that blank.

If after reading this article you’re willing to say, “Well, if forgiveness isn’t the same thing as [blank], then I am willing to consider it,” then this reflection will have accomplished everything it set out to do.

1. Forgiveness Is Not Pretending We’re Not Hurt

Simply stated – but simpler to say than to live – forgiveness is what allows us to express hurt as hurt rather than hurt as anger. Even after we forgive, hurt still hurts. If the person who hurt us gets upset with us for still hurting, they haven’t really repented.

Forgiveness is what allows us to express hurt as hurt rather than hurt as anger. Click To Tweet

Too often we view forgiveness as the culmination of a journey. When I say, “I forgive you,” I am not saying, “Things are all better now.” I am saying, “I have decided I will relate to your offense towards me differently.” Forgiveness is the start of a new journey. Forgiveness doesn’t erase the past.

2. Forgiveness Is Not Letting Someone Off the Hook

When we let someone off the hook, we are saying that nothing else needs to be done. It’s the equivalent of someone eating your lunch out of the office fridge, offering to buy you lunch, and you saying, “That’s okay. I needed to diet anyway.” That is letting someone off the hook.

But when God forgives us, he does not assume we are a “finished product.” God remains active in our life to remove the sin he forgave. Forgiveness is meant to change us, not leave us as we were. Similarly, when we forgive someone it is right to expect that this grace will have an impact on them. If someone does not agree about the wrongness and weight of the sin we’re forgiving, then the most forgiveness can do is set us free from bitterness and not create relational restoration.[1]

3. Forgiveness Is Not Making an Excuse for Someone

Sometimes we resist forgiving because we do not want to ratify a perceived downgrade in the significance of the offense. Forgiveness is not a downgrade. Forgiveness does not reclassify an offense from a sin to a mistake. Mistakes are excused. Sins are forgiven.

Forgiveness inherently classifies an offense at the top level of wrongness. When we say, “I forgive you,” we are saying, “The only thing that could make right what you did was Jesus’s substitutionary death on the cross.” For someone wanting to excuse their sin, real forgiveness is offensive (I Corinthian 1:18-31).

4. Forgiveness Is Not Forgetting

We will devote an entire reflection in this series to the misguided notion of “forgive and forget.” Here we will merely try to assuage the fear that you will be pressured in that direction during this series. Many of us wish it were possible to forget our most painful experiences. Spiritual dementia towards our pain sounds blissful.

Forgiveness doesn’t unwrite history. Jesus both cried out “Father, forgive them for they know not what they do” (Luke 23:34), and inspired the recording of the events that led to his death. Forgiveness did not unwrite history or mitigate any of the benefits of learning from history. As we’ve all been told, “Those who fail to learn from history are doomed to repeat it.” Whatever vulnerability true forgiveness brings, it is not the vulnerability of naivety.

We want to have a wise relationship with our memories. We want to mitigate the torment caused by painful, intrusive memories. We want to learn any lessons about wise trust our painful memories can teach us. We want to prevent mistrust from spreading to relationships in which it is not warranted. We want forgiveness to be part of what God does to contribute to our flourishing “from here” (even if “here” is a place we still wish we were never traveling from).

5. Forgiveness Is Not Necessarily Trust or Reconciliation

When we don’t realize this then saying, “I forgive you,” implies things are “back to normal,” and normal is what got us hurt. No thank you!

In future reflections, we will consider when reconciliation is wise and what trust development looks like after a major offense. For now, all you need to realize is that the decision to forgive and the decision to trust or resume a “normal” (i.e., as things were) relationship are two different decisions. The first does not necessitate the second. If you are being pressured to believe that forgiving requires trusting, this is reason to push pause on movement towards reconciliation of that relationship.

[1] More will be said on forgiveness, trust, and restoration in future reflections in this series.