When Talking about Forgiveness: A Guide for Christian Conversations and Ministry 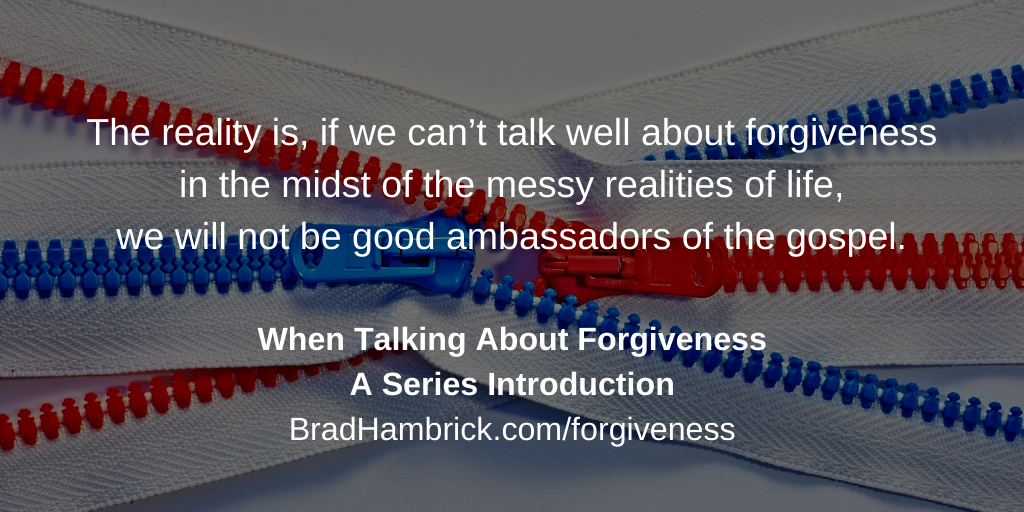 C.S. Lewis hit the nail on the head when he said, “Everyone says forgiveness is a lovely idea until they have something to forgive (p. 115 in Mere Christianity).” Forgiveness is a great theme for a redemptive novel or movie. We cry sweet tears. But as a lived experience, forgiveness means you’ve been hurt and are making yourself vulnerable again. We cry bitter tears.

The same thing can be said with a slightly different twist, “Every Christian thinks forgiveness is a beautiful concept, rich with practical gospel implications, until they preach a sermon, teach a lesson, or advise a friend about forgiveness.” All the sudden, the beautiful simplicity of forgiveness becomes painfully complicated. If you’ve had these conversations, you know how many land mines there are.

That is the purpose of this series, to help you have better conversations about forgiveness.

The reality is, if we can’t talk well about forgiveness in the midst of the messy realities of life, we will not be good ambassadors of the gospel. We will either be brutishly clumsy as we fight for what we know the right answer to be (as if we could argue someone into forgiving). Or, we become sheepishly tentative as we fearfully avoid discussing the healing response of forgiveness (as if there is relational harmony without forgiveness).

The reality is, if we can’t talk well about forgiveness in the midst of the messy realities of life, we will not be good ambassadors of the gospel. Click To Tweet

Now for a word on how it is written. There are two aims for how this series is written: brief and conversational. You will notice there are more than 20 topics listed. That is so each can be considered in a bite-size way.

Good conversations around delicate subjects usually aren’t profoundly deep and don’t cover an immense amount of information. They are simple and patiently engage one subject in a way that can be digested. Helpful discussions are content to address other things later when the other person is ready. That’s how this series will progress. Take your time with each subject and only read the next when you’re ready.

This series is also written conversationally. My aim is to use common language, clear examples, and simple sentence structure. I want you to be able to hear yourself saying these things. The emotions around forgiveness may be intimidating. I don’t want the words and concepts I use to add to your sense of unrest. I want this to be an approachable discussion of forgiveness that honors the complexity of the subject.

With that said, I hope you enjoy the journey through this series (each article to be released in the weeks ahead).