Angry with God: Sanctification – A Messy Journey in a Broken World 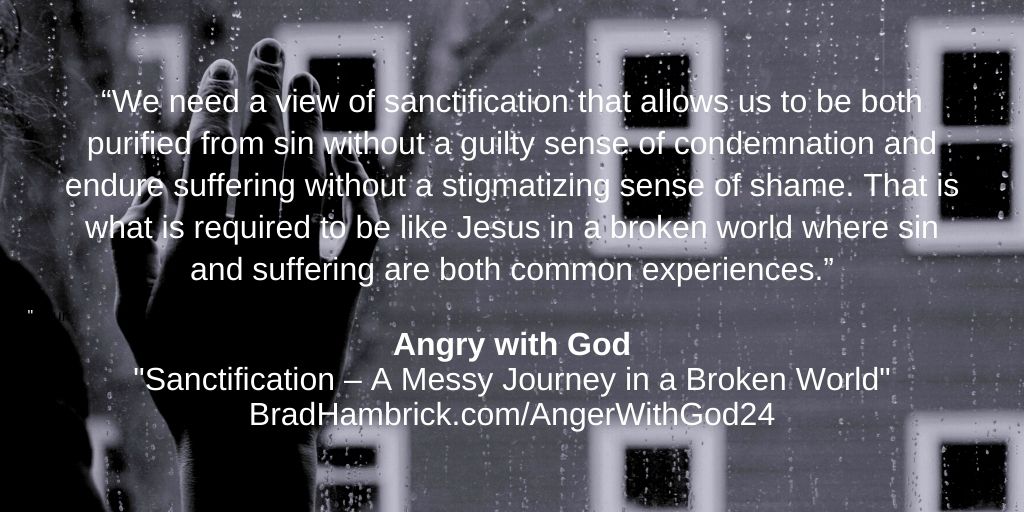 Sanctification may come across as a fancy, technical theological term. Don’t be intimidated by it. Simply put, sanctification is the process of becoming more like Jesus. When we embrace the gospel, God erases our sin debt, and we gain the assurance of eternity with God in heaven. That is salvation. It happens in a moment. For the rest of our earthly life, we experience sanctification. It happens with ebbs and flows in new ways in each season of life.

One of the challenges for us as we think about sanctification in light of the journey we’ve been taking together is that we usually only think of sanctification in terms of purification from sin. Removing sin from our lives is a part of sanctification. We do want to see the desires of our heart that make sin enticing to shrink. Even when this pruning is painful, it is good, and we should thank God for it.

But if we only think of sanctification in terms of purification, we begin to believe that every unpleasant emotion that emerges from suffering reveals an idol. This is inaccurate, creates false guilt, and easily causes God to come across as an uncaring Cosmic Cop. An incomplete view of sanctification makes it much more difficult to process grief that has stagnated in the anger phase.

So, we ask, “What is the complementing aspect of sanctification that needs to be emphasized?” We answer this question by considering, “What verb does the Bible use to describe Jesus’ response to suffering?” If sanctification is the process of becoming more like Jesus, this question would point us to the answer. In light of this question, consider Hebrews 12:2.

“Looking to Jesus, the founder and perfecter of our faith, who for the joy that was set before him endured the cross, despising the shame, and is seated at the right hand of the throne of God (emphasis added).”

We become like Jesus when we endure suffering in such a way that resists the shame that so often accompanies suffering. We need a view of sanctification that allows us to be both purified from sin without a guilty sense of condemnation and endure suffering without a stigmatizing sense of shame. That is what is required to be like Jesus in a broken world where sin and suffering are both common experiences.

This is where we ask the question, “What has become so important to me that is made the hard things I’ve experienced more difficult to endure?” Perhaps it was your sense of achievement that make the setbacks within your hardship harder to endure. Maybe it was a heightened view of loyalty that idealized the people in your inner circle and made their sins more disorienting for you.

Notice something about both examples. Achievement and loyalty are good things. We should not feel bad for wanting them. They are good expectations of healthy people and healthy relationships. As we do the soul-searching work of sanctification, we are merely asking if they became too important. Like a swollen ankle, we want to shrink them; not amputate them.

This brings us to another often-neglected aspect of sanctification. When engaged well, sanctification should focus on motives as much as actions. Yes, we want to sin (actions) less. But we also want the desires (motives) that make sin seem appealing to decrease. Unless both forms of change are happening, our underlying character is not really becoming more like Christ.

This is where we ask the question, “What parts of life have become more meaningful as a result of what I have experienced?” In Hebrews 12:2, we see that Jesus allowed the meaningfulness of what his death would accomplish – namely, salvation for those who accept his sacrifice on their behalf – to enable him to endure what he experienced.

Take a moment and reflect on what is true about people who have suffered well. We usually greatly admire their perspective on life. They have an ability to maintain focus on the things that really matter. They can persevere through discouragement for things that they deem “worth it.” We admire the wisdom and resilience their suffering produced.

This is the kind of growth we are seeking to glean from sanctification via endurance. This is what Paul described in Romans 5:3-5.

“Not only that, but we rejoice in our sufferings, knowing that suffering produces endurance, and endurance produces character, and character produces hope, and hope does not put us to shame, because God’s love has been poured into our hearts through the Holy Spirit who has been given to us.”

We often become distracted by the verb “rejoice” in verse three. Notice that Paul is affirming the outcome of suffering well: endurance, character, hope, freedom from shame, and a realization of God’s continued love. Paul is not affirming the experience of suffering. That is what we want to do as we consolidate the progress you’ve made on this journey. We want to affirm the ways you’ve grown through endurance.

Ask yourself the following questions:

As you answer these questions, try to frame your responses in a way that does not center on your pain. For instance, instead of saying, “I don’t care about what negative people think about me anymore. I just tune them out because they only hurt me,” you might say, “I’ve realized who the people are I want speaking into the significant decisions of my life. That simplifies decisions and stabilizes my emotions. I enjoy life more because of it.”

This change isn’t about superficially being more positive. It is about experiencing more freedom. As we grieve in a healthy way, we will decentralize the hard things from how we think about day-to-day life. Notice, from Hebrews 12, it is what Jesus did. Jesus did not focus on those who would not accept his sacrifice on his behalf (which is equally true). Jesus focused on what gave positive meaning to his suffering. This is what empowered him to endure.

We need a view of sanctification that allows us to be both purified from sin without a guilty sense of condemnation and endure suffering without a stigmatizing sense of shame. Click To Tweet

As you think about sanctification as a whole – both purification and endurance – remember one more thing: sanctification is a process. Give yourself the freedom to grow based on what you’re learning rather than expecting yourself to have arrived because you’ve understood some things. This is another way to protect your heart in the process of growing so that you experience sanctification as the gift God intends it to be.