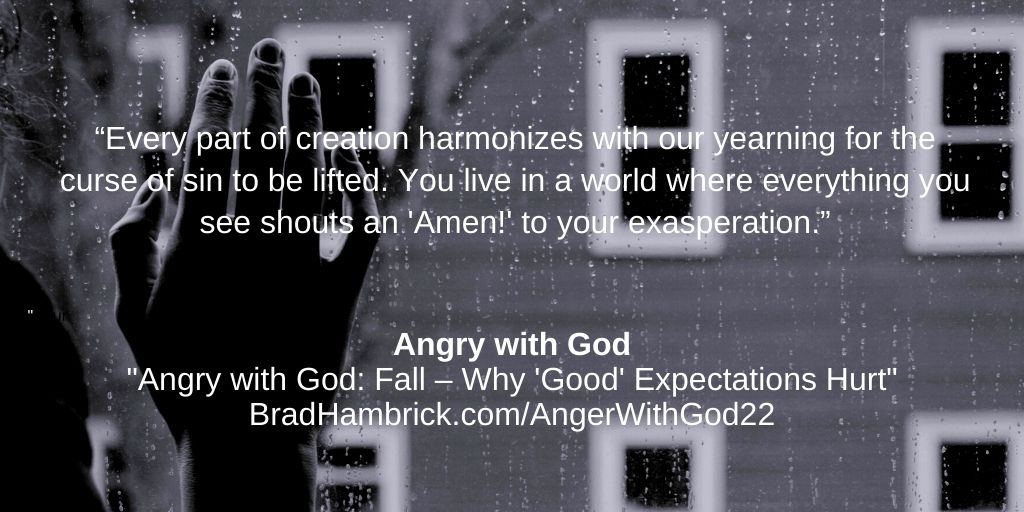 Maybe you’ve read or watched The Lord of the Rings (LOTR) trilogy. Fans of LOTR will tell you that you have to understand The Hobbit to understand LOTR. The Hobbit is where you meet Bilbo, understand the ring with its strange powers, and get to know the geography and inhabitants of middle earth. The drama of LOTR only makes sense in light of The Hobbit. For this reflection, we will be establishing the parallel that Genesis 3 is equivalent of The Hobbit to the rest of the Bible.

Genesis 3 is commonly referred to as the account of the Fall, the moment when sin entered and marred creation through the choices of Adam and Eve. Everything else in the Bible is about correcting the damage that infused creation during the events of Genesis 3. According to the Bible, everything that goes wrong in our life – the bad things we do (sin) and the hard things that happen to us (suffering) – has its origin in Genesis 3.

We ended the Creation reflection by noting how the goodness of creation affirms the pain we feel. Unfortunately, affirmation does not remove hurt. We may feel understood and that is better than the alternative. But having a theological explanation for our pain doesn’t anesthetize it. Again, by way of parallel, understanding the cause and effects of a concussion is helpful, but doesn’t alleviate the subsequent headaches and disorienting of our thinking.

So, we ask, “Why are we considering the Fall? If it won’t make our pain go away, what good will it do?” This is a fair question. While there is momentary relief in realizing we’re not going to try to explain your pain away, this relief is quickly followed with the, “Well, what are we going to do?” question.

We consider the Fall to remove some of the shock from our pain. But we tread lightly even as we say this. Because it’s not the personal shock we are removing. We may still ask, “How could you [i.e, spouse, pastor, friend, teacher] do that [i.e., betrayal or offense].” As we’ve said many times, the bonds of trust that allowed us to be hurt mean it was appropriate for us to be surprised. If we were not surprised, we would live with such a level of skeptical cynicism it would impair our emotions and relationships.

Understanding the Fall removes some of the “that it could happen at all” shock. It is easy to succumb to the notion that we live in a good world with good people; at least in those circles of family and friends we begin to trust. When we believe we live in a good world, the profoundly painful experiences of our life make it feel like a super villain invaded a romantic comedy.

By way of illustration, if I am at a haunted house and someone jumps out from behind a door with a knife, I scream like a little girl, catch my breath, and scowl at the feigned attacker. I didn’t fully know what to expect, but I was expecting something bad. However, if the same thing happens at my home, I fight for my life. An awareness of the Fall means we realize we live in a world haunted by the effects of sin.

Actually, it gets worse. The Fall means we are all capable of more evil than we care to imagine. The Fall reminds us that, apart from the grace of God, we are all capable of the kinds of betrayals and offenses that have significantly disrupted our lives. The depth of the problem of sin is why Jesus had to come (incarnation) and die to pay the “wages” (Romans 3:23) of death on our behalf. The pain that prompted our angry-grief should alert us to the weight of why Jesus came and the significance of what Jesus did.

A Word of Caution

Too often, this kind of truth is used to try to assuage pain by shared guilt. It becomes a “the ground is level at the foot of the cross” appeal that reminds us that we are just as guilty before God as the person(s) who hurt us. This is true, but it is not the point we are making here. Further, making this point to someone who is processing a betrayal poorly represent God’s redemptive agenda.

When someone is rescued from a burning building, God’s response wouldn’t be to remind then, “You know, Hell is a lot hotter than that fire and without me you would feel that for eternity.” God doesn’t use moments of suffering to send sin-zingers. After being rescued from a burning building, God’s response would be comfort towards the fear, grief towards the loss, and lamenting that in a broken world things go awry in a way that buildings that should be able to be trusted burn. That is the point we are making.

If you read Romans 8:19-24, this is the pastoral appeal being made when it is acknowledged that all of creation groans under the weight of the Fall. In its own way, each part of creation feels the effects of the Fall and cries out in agony. Every part of creation harmonizes with our yearning for the curse of sin to be lifted. You live in a world where everything you see shouts an “Amen!” to your exasperation.

Every part of creation harmonizes with our yearning for the curse of sin to be lifted. You live in a world where everything you see shouts an “Amen!” to your exasperation. Click To Tweet

It is in this context that we are less surprised. Pain and betrayal fit our post-Genesis-3 reality. In that sense, it is like having a teenage driver in your home. You know, in that reality, you are likely to get a phone call that he or she has gotten in a wreck. On the day that the call comes, you are surprised-but-not-surprised. You didn’t wake up and think, “Today is the day.” You had other plans for what needed to get done. Your growing trust in their developing skill behind the wheel only adds to your surprised-but-not-surprised feeling. Pain in a post-Genesis-3 reality is a lot like that.

So, what do we do with this reminder of where we are in the story of redemption? At this stage in the redemptive journey, we strive to avoid succumbing to cynicism.[1] Cynicism is the disposition that believes it can see through any good situation or action to the bad situation or motive that underlies it. The problem with cynicism is that it believes it can see through everything. All of life becomes a window and nothing is a tree.

If the story of redemption stopped at the Fall, cynicism would be the most rational response. Anything else would be denial. But because the gospel story continues, we can be hopeful realists. We can acknowledge that bad things are bad; even that evil things are truly evil. The Fall says there is no need for minimization. But the rest of the gospel story, as we will see, says that we can be honest about the world in which we live with hope, because evil does not get the final word.

[1] If you are wrestling with cynicism and want to work on this further, I recommend the book Seeing Through Cynicism by Dick Keyes (IVP, 2006).