Angry with God: Creation – Why We Have Expectations of Good 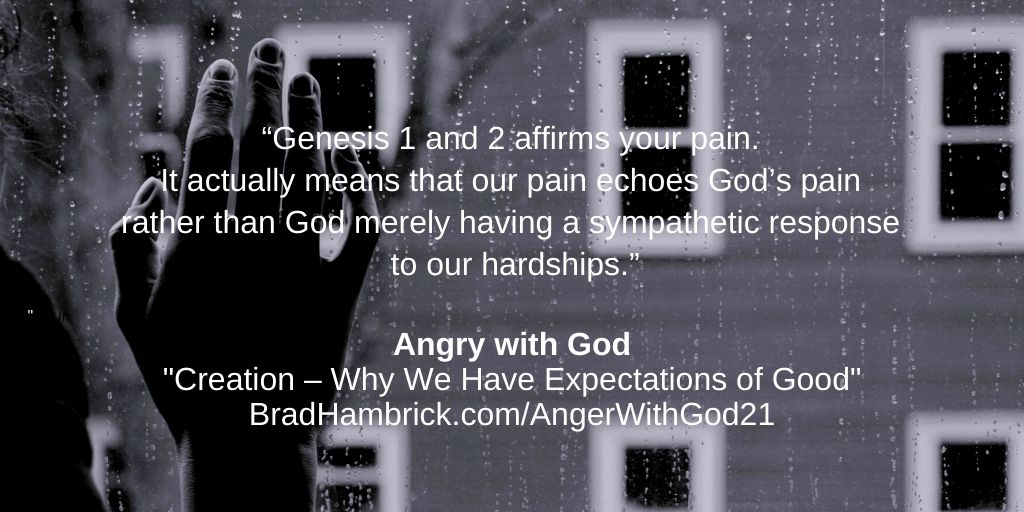 We are turning the corner to the final section of this series. While our entire journey has tried to be biblically-based and theologically-informed, this final leg of our journey will seek to integrate all of the progress we’ve made into the five major themes of the gospel: creation, fall, redemption, sanctification, and glorification.

Even if this language isn’t intuitive to you at first, seeing how these themes organize and make sense of the journey we have been on together is an important part of restoring the freedom to worship again. Part of stewarding this painful journey should include a more robust understanding of how God works in our lives as we live in a broken world where profoundly painful things happen.

A question that we could have started our journey with, if our primary concern were only theological accuracy, would have been, “Why are we surprised and upset that bad things happen? If we live in a survival of the fittest world where everything is random, why do we have the expectation of good things happening?” Our goal was to process pain and grief healthily, so we did not start with this question, but at this phase in our journey the question has merit.

Often, we miss how much our belief that the world should be just assumes that a loving and fair God created a world that he declared “good” (Genesis 1:31). The belief that life randomly progressed from microorganism to intelligent, moral beings with retractable thumbs and that eventually another life form will supplant humans as most advanced creatures doesn’t give a reason to expect life to be fair. In that belief system, you either eat or are eaten. You’re more worried about being prey than praying.

For this reason, our anger was right to assume God was the problem. At least, God is the reason we have such a conflict of conscience when the scales of injustice are not balanced. God is the problem for a very good reason, because without him, we would expect life to be a free-for-all where only the strongest win and, therefore, might makes right. Because God made the world be good we get emotionally disrupted when things go painfully awry.

This means as we take this journey of grieving the injustice of our pain, we’re not crazy. We are not trying to decode the message in the white noise of a television set without an antenna. We are looking at the pieces of a beautiful piece of art that has been shattered, saddened that it’s broken, and wondering how to put it back together again.

The creation phase of the gospel was short-lived; only two chapters in the Bible (Genesis 1-2). But, although brief, it lays a foundation that is immensely important for our emotional regulation. It tells us that we are not naïve, immature children to expect that the world was meant to be a good place.

Genesis 1 and 2 affirms your pain. It actually means that our pain echoes God’s pain rather than God merely having a sympathetic response to our hardships. Imagine the world as it existed at the end of Genesis 2, beautiful and unmarred in any way. Now imagine what it was like to the heart of God when his masterpiece of creation was sin-soaked and shattered by the initial sin. What we imagine, God remembers.

Genesis 1 and 2 affirms your pain. It actually means that our pain echoes God’s pain rather than God merely having a sympathetic response to our hardships. Click To Tweet

God never forgot what he intended this world to be. That is why, at the end of time, he will establish a New Heaven and New Earth (Revelation 21). God is committed to seeing his original intent fulfilled and enjoyed. But, in the meantime, God is redeeming what was broken. We will talk about this process in the gospel themes to come, but from the creation theme you should take affirmation. God agrees with you; more accurately, your emotions of grief affirm God’s response to the marring of goodness because he felt it first.

This series has been filled with pictures for your mind’s eye to help you relate what is disorienting (i.e., grief and pain) to things that you are familiar with. Here is another. Imagine the goodness of creation like a beautiful melody, a song. Now imagine that this song of songs is being played by a middle school band. You can still hear and distinguish the melody, but you can also tell it’s “not the same.”

This picture captures much of what our current experience of the goodness of creation is like. There is enough of the God’s fingerprint remaining on the sin-scarred world that we still see it, hear it, feel it, and long for it. Where God’s creation goodness is disrupted, we get upset; sometimes sad, other times angry. But hearing the melody of God’s creation goodness reminds not to give into the cloud of cynicism that so easily settles over our life in this broken world.

So, as you reflect on this first theme of the gospel, the implication is simply, “Do not relinquish your expectation and aspiration that things be good.” Both your anger and your grief have been evidences that you haven’t. It is callousness and cynicism that evidence a surrender of the idea that things should be good and can be again. The goodness of creation reminds us it is better to feel than not to feel, even when the emotions are unpleasant, when we experience evidence of God’s good design being marred.