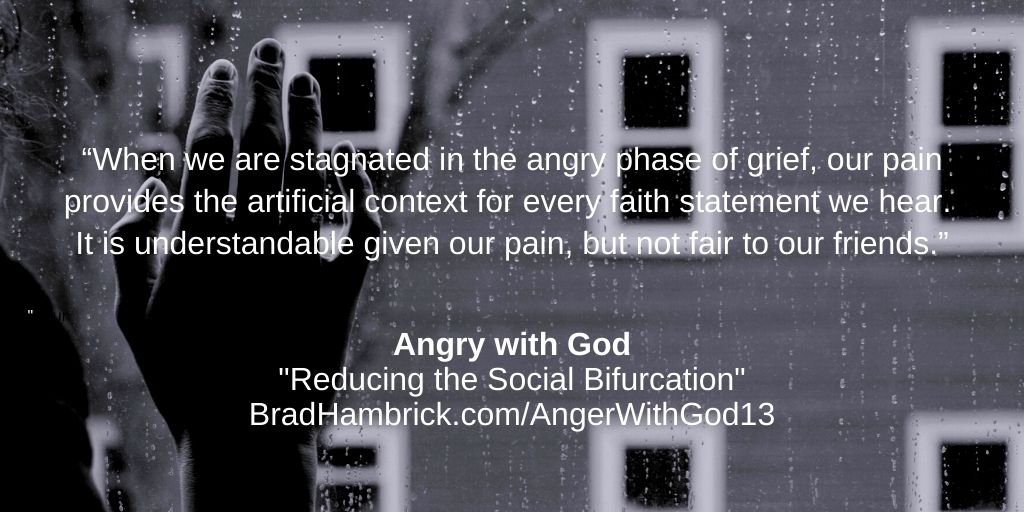 You may have heard people say, “Anger is divisive.” This is true. But it is true in more ways that we often realize. Typically, when we say, “Anger is divisive,” we mean that the words or actions resulting from anger hurts people’s feelings and harms the relationship. This is the way anger is interpersonally divisive; that is, creates a division between people.

We are prone to think, if we don’t talk about how we divide people then it doesn’t hurt anyone, and it shouldn’t matter. But that thinking process is false for at least two reasons. First, it hurts us. Living in a highly “teamed” world hurts us. The default suspicion throttles the rate at which new relationships can develop and stunts the growth of casual relationships into deeper friendships. Further it results in an over-reliance on our trusted relationships that can easily create a controlling tendency or one-strike-and-you’re-out response from us.

Second, we are rarely as coy as we think in how this binary teaming mindset impacts our relationships. Even if we’re “nice” (usually defined by the absence of rudeness), people can tell when we’re guarded. When we are less authentic, so are the people around us. At its best, this keeps relationships shallow. At its worst, this results in the majority of people getting put on the bad, unsafe, or don’t get it team.

Socially, as we seek to get unstuck from the grief-as-anger phase, our goal is to live in a less teamed world. We want to remove the binary mindset that says, “If I don’t know you’re for me, then I assume you’re against me.” For a time, this mindset may have kept us safe. But if it calcifies into a life principle it becomes a lens of suspicion that traps us in a world defined by our pain.

From Uniforms to Spectrum and Quadrants

Our first goal is to move people from wearing uniforms – being allies or adversaries – to existing on a spectrum. Actually, there are at least two spectrums that are helpful to consider as we seek to reduce the bifurcation in how we think about relationships.

The chart below is meant to help you gauge where your level of trust is for people as they progress across two spectrums. Once you familiarize yourself with the chart, you can plot relationships – with dots – that represent where they are and use that to ask yourself if that is where they belong.

Spectrum One: How Well I Know You – Our goal is to elevate the starting point for this line from negative to neutral and allow it to build as we get to know someone better. Past pain has a way of plotting new relationships lower on the scale towards mistrust. This ask new friends to pay the trust debt created by old friends.

Spectrum Two: How Much You Impact My Life –Wisdom says, the more you impact my life, the better I need to know you to trust you. We need to know a business partner more than a gym friend because the impact they have on our life is greater. We want to begin to let wisdom, rather than suspicion and pain, determine our thresholds of trust.

Q2: This is the quadrant in which we are trying to reduce the population. In our pain, this quadrant gets over-populated. People in this quadrant are likely people who are close friends or people in Q3. We don’t know them, but we know they have a pre-existing allegiance to someone we know well and has hurt us.

Q3: This is the quadrant for unrepentant people who were part of the experience(s) that prompted this journey. These are people that it would be foolish for us to trust without significant change occuring. Some Christians would say it is wrong to put anyone this quadrant.[1] If you struggle with that impulse, consider reading When to Walk Away by Gary Thomas.

Q4: This is the quadrant we want to increase; it contains our most life-giving relationships. Early in this journey you’ve been encouraged to confide in a few trusted friends. There are Q4 people. But we don’t just want support network people in Q4. We also want people in Q4 that we’ve gotten to know outside of processing our painful experience that prompted this journey. Being able to have meaningful relationships that aren’t intricately aware of what happened is part of decentralizing these events from your life story. This is sign of significant growth.

Now, let’s ask two questions, “How many people do you have populating each quadrant? How many potential Q4 people do you currently have in Q1 and Q2?” Plot the relationships in your life on this chart. For the tenured relationships, you will likely use a line, rather than just a dot, to properly represent the development of the relationship. Reducing bifurcation means you reduce the tendency to plot all your relationships, especially the newer ones, at the extremes of trust or mistrust.

Being on the journey means you are a person of faith and that your faith is important to you. People who don’t care about God, don’t get mad enough towards God that it impacts their life that much. That means Q1 people who are also people of faith may be a double-edged sword: candidates to be quality Q4 friends and individuals who talk in a way that echoes your past pain. Being aware of this dynamic is the first step towards responding to it wisely.

We will often talk about topics differently in casual conversations than we will in sensitive conversations. In school, we might talk about studying for a test as “no big deal” in one setting, but with more care when talking to a friend we knew needed to do well to pass the class. Similarly, we talk about a meal differently in a casual setting than when we’re with someone we know is working hard to lose weight.

This isn’t duplicity. It is the heightened care, which a sensitive context requires, but would be tedious to do at all times. This is the dynamic that inadvertently banishes many Q1 people to Q2 or Q3 in our mind. Someone makes a casual comment about the goodness of God, the value of faith, or beauty of community and we become like the student grinding to pass a class hearing a classmate talking about how they’re not worried about the test at all. These are the moments we need to learn to respond to differently if we’re going to have fellow Christians move from Q1 to Q4.

We start by realizing that casual statements of faith are not bad – that is, not rude or heretical; they’re just incomplete and without context. When we are stagnated in the angry phase of grief, our pain provides the artificial context for every faith statement we hear. It is understandable given our pain, but not fair to our Q1 friends. We want to hear their statement from the context they understood they were speaking in to rather than imposing our situation (of which they are likely unaware) around their words.

When we are stagnated in the angry phase of grief, our pain provides the artificial context for every faith statement we hear. It is understandable given our pain, but not fair to our friends. Click To Tweet

If we’re with a friend at the end of the day as the sun sets and they say, “Isn’t everything that God does so amazing and beautiful?” that statement may set off alarms for us in light of our history. God has done – or, at least, allowed – some things in our life that weren’t amazing or beautiful. But our friend was just commenting on the sunset. We don’t want to douse their awe at God’s creation.

This means we are faced with a choice that has three options.

Thinking in terms of spectrums and giving yourself more options for how to respond to casual statements about God and faith allows you to resist the tendency towards binary teaming. It helps us circumvent the all-or-nothing nature of our responses when anger is present in our emotions. It allows new relationships to grow at a healthier and more natural pace.