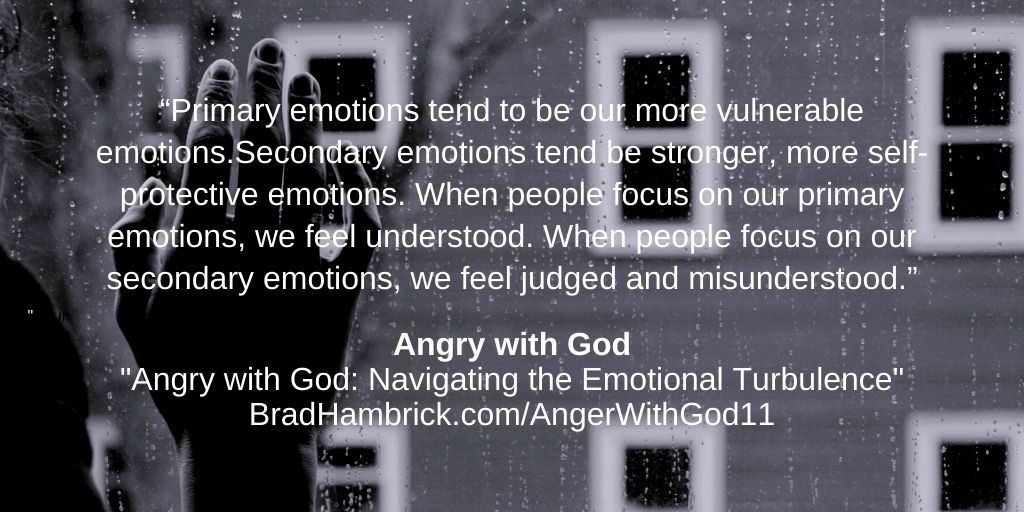 So far, in this series, we have sought to establish a safe context to process our angry-grief (Section One) and to put our experience into words in a way that sets us up to process our pain (Section Two). Now we’re entering a new phase, we want to begin to understand and disempower the various types of disruptions angry-grief has brought into our life. We will start by seeking to understand and respond to the emotional interference.

As we try to understand how we get stuck in the angry phase of grief, it can be helpful to differentiate primary and secondary emotions.

Let’s return to our case study. If you interviewed the child intercepted from heading towards the busy street and asked, “At this moment, do you think your parent is angry or afraid?” Chances are, the child would respond, “Angry,” because the tone and volume of the parent’s secondary emotions would have come through as they said, “Stop!”

If you confronted the parent for being angry, the parent would get indignant. “What am I supposed to do, just let them run in the street? Can my child be in danger and my emotions remain tranquil?” However, if you said, “I know it’s scary for your child to be in danger, but they’re safe now. Take a deep breath,” you could deliver the same message – relax – and get a much more cooperative response.

Now let’s move on from the simplicity of this case study to grappling with the question, “How does this distinction help us navigate our angry-grief?” The answer begins with the realization that anger feels safer than grief. When we’re hurt, we want to feel safer. But getting stuck in our secondary emotions, pushes people and God away (at least, it impairs our ability to receive the care God wants to offer).

Similarly, we can tell the same story in the tone of different emotions. By way of parallel, the red crayon represents anger, and the gray crayon represents grief. Your initial goal is to tell the story you’ve been collating in Section Two of this series in gray instead of red. We’ve taken the time to collate the story and validate the red, so that telling the story in gray is possible.

The natural question is, “What does this sound like?” Most notably, it will impact the moments when your voice gets louder, your throat gets tights, and your eyes get sharp as you talk. Whatever your “fight responses” are when you tell your story, those reveal the relevant moments. You want to talk about the disruption you felt in those moments rather than trying to prove a point.

Examples of talking in gray instead of red might include:

In these contrasting statements, there are four principles modeled for how to tell your story in gray; that is, with your primary emotions in the foreground instead of your secondary emotions.

First, you will notice more “I statements” than “you statements” in the alternative versions. This is particularly important when you are talking to someone who hurt you.

Second, the alternative versions turn rhetorical questions into statements of feeling. This helps make your request for compassion feel less like the closing argument in a jury trial.

Third, the alternative versions restate mind-reading-declaratives (presuming you know other people’s motives) into a statement of the conclusion you drew from the situation. This moves you out of the “all knowing voice from above” to a hurting person within the story.

Fourth, the alternative versions remove the dramatic flair. They are vulnerable and factual rather than powerful or theatrical.

These changes are good for you and helpful to the person hearing you. It helps the person hearing you enter your story. Focusing on primary emotions elicits more natural compassion from your friend. It draws people in. It helps you, partly because it draws your friend in, but also because it places you in a better disposition to receive the comfort they are more likely to offer. Your guard is down; in a good way.

To summarize, when we get stuck in the anger phase of grief, one way this manifests is that we become too reliant on our secondary emotions to express how we feel. This pushes people away, leaves us alone in our pain, and reinforces a perpetual sense of danger. We are at a place in our journey where we want to begin telling our story in gray. We want to advance in our grief and speak in a way that invites the comfort we long to receive.