Angry with God or God’s People? 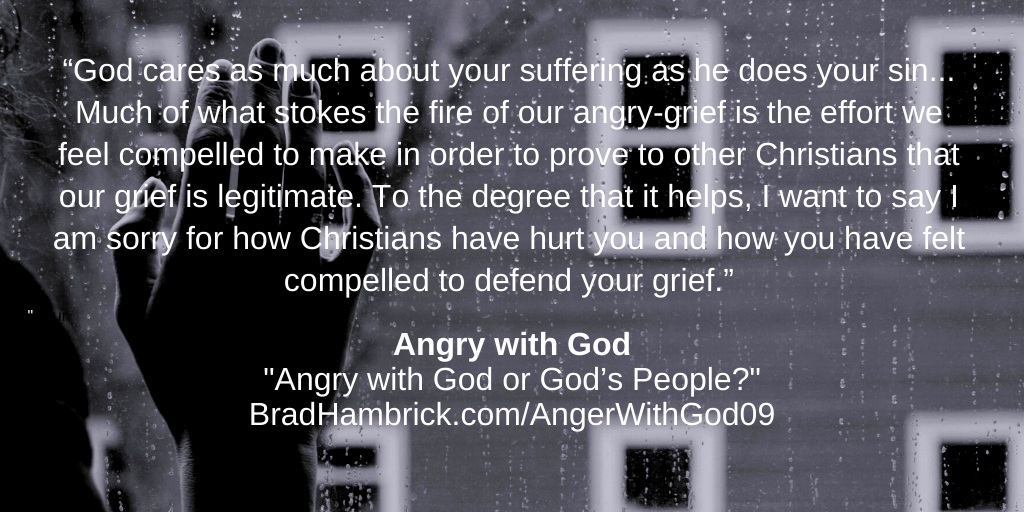 Knowing who we are actually mad at is important. It is not always as easy to discern as we think it should be. Sometimes when we’re angry, it feels like any target will do. Interpersonally (between people), if we’re wrong, it means our anger damages relationships that were otherwise healthy. Intrapersonally (within ourselves), if we’re wrong, it means our efforts at resolving our anger will be ineffective.

To this point in our journey together, we have operated under the assumption that our anger with God is one component of an expression of grief. While its true that anger is often an early stage of grief after a profoundly painful experience, it may not be accurate to say this captures your experience.

You may have patiently tracked along with this logic, but now have concluded, “No, I’m not just grieving. I’m actually angry. Grief doesn’t capture all or most of my experience. The earlier reflections were insightful, but didn’t capture my experience.” If that’s the case, you were likely hurt by God’s people.

It makes sense that we would trace being offended by God’s people back to being offended by God. God’s people are supposed to be God’s ambassadors (2 Cor. 5:20). If an American ambassador is offensive to another country’s leadership, then he/she represents the United States. This reality is why Christian’s should take their actions with others seriously. As Christians, we carry God’s reputation with us.

This is the kind of distinction we want to begin to make in this reflection. In the same way we would not want to right off an entire country because of a bad ambassador, we don’t want to turn our back on God because of a hurtful Christian or church. But what do we do? The journey we’ve taken together to this point, should be able to be galvanized in three actions.

It is unfortunate that when Christians hurt others, we often defend our actions by insinuating that God is on our side. In our metaphor above, the ambassador may bluff (or even truly believe) that the president approves of the rude things he did in the country’s name.

Two factors give this bluff greater influence. First, the ambassador has high standing. If the Christians who hurt you were “leaders” in the church, this same effect is present. Second, the foreign diplomats have closer affiliation with the ambassador. Because the church is the most tangible representation of God on earth, this is true for us as well.

Hopefully, what you have learned in the early part of our journey together is that God cares as much about your suffering as he does your sin. You’ve begun the work of sorting your moral laundry: identifying wrong actions that merit repentance, recognizing areas where you can grow in wisdom, and resting in ways that your experience was “just suffering” and comfort is what you need.

You don’t have to prove these things to anyone in order to rest in God’s compassion. God’s compassion is not mediated by the jury of his church. God is compassionate towards your grief, even when that grief is in the early stages of being expressed as a “hot lament.”

Much of what stokes the fire of our angry-grief is the effort we feel compelled to make in order to prove to other Christians that our grief is legitimate. To the degree that it helps, I want to say I am sorry for how Christians have hurt you and how you have felt compelled to defend your grief. I hope that acknowledgement helps you settle into the next stages of the grieving process.

Much of what stokes the fire of our angry-grief is the effort we feel compelled to make in order to prove to other Christians that our grief is legitimate. Click To Tweet

You’ve already been invited to begin identifying Christian friends who can be a more accurate and holistic ambassador for God in your life. A good litmus test that these friends are being holistic is that they can identify parts of your life that fit in each basket of the moral laundry sorting. A sign of your goodwill in this process is your willingness to hear them as they suggest things that belong in each basket.

Think of these people as the “remnant” of God’s people that is often spoken of in the Old Testament (e.g. Ezra 9:8). While our experience of grief does not mean the majority of Christianity is disingenuous, there are two ways in which this theological theme can be helpful.

First, it recognizes that there is a segment of the church that is only culturally Christian (i.e., wanting to be viewed as “good people”) and who leverage the institution of the church for personal power. Jesus warned that people would use his teachings this way (Matt. 7:15).

This doesn’t have to mean a hurtful church is apostate or a cult. It can be a collection of people within an otherwise healthy church trying to leverage their roles within that church in ways that dishonor God. To arbitrarily pick a number, even if these individuals are only 5% of Christians, they may be a majority of the so-called Christians in your life or just the most influential Christians in your immediate vicinity.

Second, it may capture your current emotional experience. You don’t have to believe Christendom is a sham for it to feel like these few, trusted Christian friends are the remnant of God’s care for you. We may find that, like Elijah in I Kings 19, our pain has made our guestimate regarding the number of God’s faithful people remaining much bleaker that it actually is. But even if so, we begin our journey towards a healthier perspective from where we are.

This would be a good time to go to those Christian friends who have been faithfully walking alongside you and say something like, “I want you to know I really appreciate your friendship and support. I may not be in a great place right now, but it would be a lot darker without you. You have been an evidence of God’s grace in my life when I really needed it. Thank you.”

Your work on the “What was Good?” and “What Happened?” reflections in this series may be helpful in making this assessment. When you’re ready, you could send your summary of those exercises to the individual(s) who hurt you with a note, “This is how I remember the things that happened; both the good parts of what we shared and what has led to the strain between us. If you think this is a reasonable summary of what happened, I would be interested in trying to restore some of our relationship.”

Before sending a note like this you would need to have the emotional resilience to bear these individuals declining your invitation or stating that they do not find it reasonable. Until then, your work should be on personal recovery. But, if they decline, you can rest that you have fulfilled the “as far as it depends on you” clause to try to live at peace with your fellow believers (Rom 12:18).

It would be easy for the culmination of this reflection to distract from its primary intent. When you are ready to extend an olive branch to fellow Christians who hurt you and whether they are willing to respond in kind is not the primary point. The primary point is to avoid the common tendency to allow anger from being hurt by God’s people to leak into becoming angry at God.

God is for you. God’s people do not always represent God well. If the people who bear his name become an obstacle to your relationship with God, then the cost is severe to you. It is like a country that cuts off all imports, exports, and treaty protections from another country because of a rude ambassador. Please do not cut yourself off from all that God intends to be in your life because some of his people did not represent him well.

[1] For more on this concept, see “Is Embracing Forgiveness from Others Harder Than from God?” https://bradhambrick.com/forgiveness18.