Angry with God: Hurt vs. Heresy 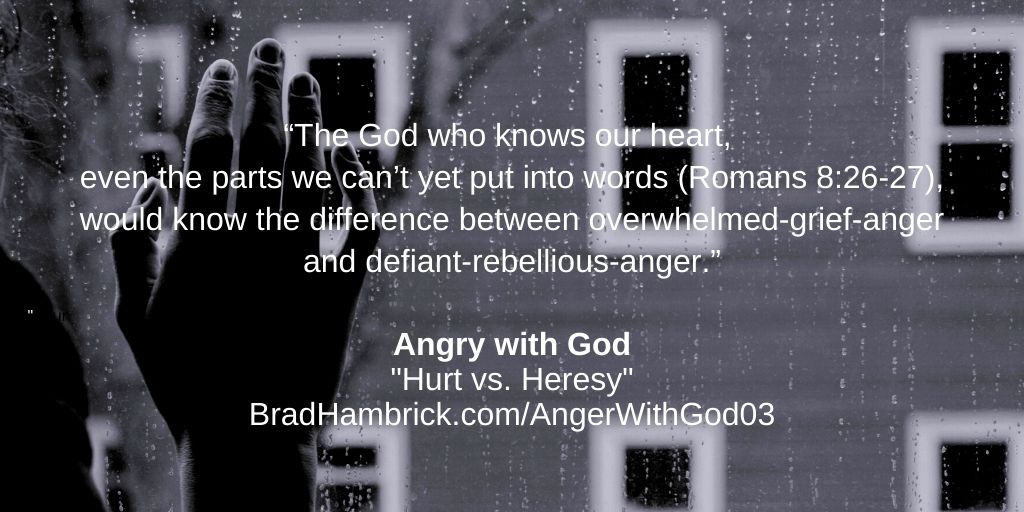 I want to start this reflection with story. We will use this story like a parable or a metaphor. We will be working together to understand how we should view the intense, unpleasant emotions and thoughts we have towards and about God during times of profound pain.

The main character of the story-parable we will consider is a child. Please do not take this to mean our response to painful events is juvenile. I chose a child because we are sympathetic to children, and I want the character you identify with in the story to be a sympathetic one. Like any parable, this one over-simplifies some things to highlight its main point.

Imagine a child who gets a new puppy when he is 3 years old. Boy and puppy bond and make many good memories, learning the game of fetch and exploring the world together, over the next several years. [This parallels the “Before” time zone from the timeline and topography exercise.]

Then when the boy is 7 years old, someone forgets to shut the gate on the backyard fence, the dog gets out, and is hit by a car. The family hears the accident, rushes the dog to the vet, but it’s too late. The boy rides in the car on the way to the vet, cries in the waiting room, and is devastated when the vet finally comes out with the news. [This parallels the “Event(s)” time zone from the timeline and topography exercise.]

Over the next several weeks, the boy doesn’t want to play in the yard anymore because it reminds him of his dog. When he is emotionally flat with his friends, several of them respond, “What’s wrong with you. It’s just a dog. You know your parents will get you another one.” His grades start to slip becuase he just doesn’t care about anything anymore. He’s overwhelmed. [This parallels the “Aftermath” time zone from the timeline and topography exercise.]

Finally, when his parents get his report card and try to talk to him, the boy explodes, “Get off my back! You got me the dog. You knew he would die. That means you don’t care. You wanted me to feel like this. You had to know we wouldn’t shut the gate every time. All you care about is my grades. You’re the worst parents ever! I hate you! I wish I could just be by myself forever. I don’t want to be part of this family! Go away and leave me alone!” [How to think about responses like these, in our pain, is the subject of this reflection.]

I hope, in this story, you can see the broad-brush strokes of why we get angry with God. It may not parallel exactly with your story, but I think we can ask three questions that will help us figure out what to do with the sharp and sometimes untrue things we think and feel about God.

What do we make of the emotions in this story?

What about the statements, “I hate you,” and, “I wish I could just be by myself forever… I don’t want to be part of this family,”? How much should the boy be asked to own those words? Should the response be different if the boy were 17 after a breakup with his girlfriend, or 27 and his wife died? What if the boy is still saying these things 3 months later? How long, if at all, should the parents overlook his slipping grades? Would the approach change if the boy took the more active step of running away from home?

I think we can agree the boy is grieving and his angry words are his grief spilling over into a situation that is overwhelming to him. The boy’s emotions reveal very important things about him, but if we only looked at the surface expression of the emotions, we would get the wrong impression. We would see a young man headed toward delinquency needing correction rather than a child lost in his pain needing comfort.

After profound pain, when we feel things about God like this boy felt about his parents, our friends often say we’ve crossed the line from expressing pain to being irreverent. The question we will grapple with in a moment is, “What does God make of our emotional expressions during our profoundly painful experiences?”

What do we make of the factual claims in this story?

The boy in our story didn’t just feel (emotions), he also declared (made factual claims). He said some true things and made some evaluative comments based on those statements. Those factual or evaluative statements would be things like:

Some statements the boy makes, if said about God, wouldn’t actually be heresy. God did know. What makes it awkward to hear is not that its false, but that it is starting to build a case. Other things the boy said are false. The parents do care; uncaring parents don’t buy puppies. Then, some things are just partial; the parents do care about his grades, but that’s not all they care about.

For statements like these, the most important thing is not whether they are said/felt, but whether they linger; whether we embrace them as core beliefs. A good parent can weather a storm of overwhelmed, hot grief. No rebuttal is needed. Tenderness in the moment is the best rebuttal. But if these beliefs solidify from emotional reactions to firm beliefs, that is the problem.

How would God, as a good parent, respond this story?

I think it’s fair to say that God wouldn’t go point-counterpoint with this boy refuting each false claim and picking apart each inaccurate deduction in his reasoning. Further, I don’t think God would challenge the validity of his sharp emotions as being inappropriate for their parent-child relationship.

Upon what do I base this conclusion? For one thing, the number of “hot laments” in the Bible. We’ll develop this more as we move through this series, but God included many angry expressions of hurt and confusion in the Bible, which he did not feel compelled to correct. One we’ll look at in detail, if you want to preview it, is Psalm 44.

But let’s return to our question. Detailing what God would not do, is not the same as clarifying what God would do. The God who knows our heart, even the parts we can’t yet put into words (Romans 8:26-27), would know the difference between overwhelmed-grief-anger and defiant-rebellious-anger. God doesn’t grade us on the basis of a list of unspeakable words or decimal levels of our voice. God can see the heart of the person who is speaking those words at a particular volume.

The God who knows our heart, even the parts we can’t yet put into words (Rom 8:26-27), would know the difference between overwhelmed-grief-anger and defiant-rebellious-anger. Click To Tweet

Let’s use our imagination to continue the story we began. Imagine this angry boy, who wants to know that someone is hurting as much about his loss as he is, says, “I do. I really do hate you. You knew. You did this. I’ll never forget it. I’ll never get over it.” What is the best negation the parents have for these claims? Soft, tender eyes that mirror his pain rather than stern eyes that seek to shut him down.

This point is beautifully illustrated by the interaction between Digory and Aslan (portraying Jesus) in The Magician’s Nephew of The Chronicles of Narnia. Digory finds his way into Narnia and is searching for a cure for his dying mother’s cancer. Digory comes face to face with Aslan. He begins pleading for a cure.

“But please, please – won’t you – can’t you give me something that will cure Mother?’

Up till then, he [Digory] had been looking at the Lion’s great feet and the huge claws on them; now, in his despair, he looked up at its face. What he saw surprised him as much as anything in his whole life. For the tawny face was bent down near his own and (wonder of wonders) great shining tears stood in the Lion’s eyes. They were such big, bright tears compared with Digory’s own that for a moment he felt as if the Lion must really be sorrier about his Mother than he was himself.

‘My son, my son,’ said Aslan. ‘I know. Grief is great. Only you and I in this land know that yet. Let us be good to one another.” C.S. Lewis in The Magician’s Nephew

Digory expected Aslan’s emotions to be in contradiction to his own; the majesty of Aslan’s paws and claws reinforced that Digory’s belief that Aslan would try to overpower his pain; put him in his place. He was surprised to find Aslan emoting with him, harmonizing with his grief. Digory expected resistance (hence the “please, please”), but experienced empathy. This did not cure his mother, but it provided the foundation of trust for Digory to continue his journey not knowing how it would turn out.

If we can get to that point with our pain, we will have made great progress. It is okay, like Digory, to be taken aback by God’s response. As you consider how God responds to the pain you feel, begin to let the main image in your mind be the sympathy of one who knows it well found in Hebrews 4:15-16.

“For we do not have a high priest [Jesus] who is unable to sympathize with our weaknesses, but one who in every respect has been tempted as we are, yet without sin. Let us then with confidence draw near to the throne of grace, that we may receive mercy and find grace to help in time of need.”