Conversations through 95 Theses – Technical Language and Learning from History 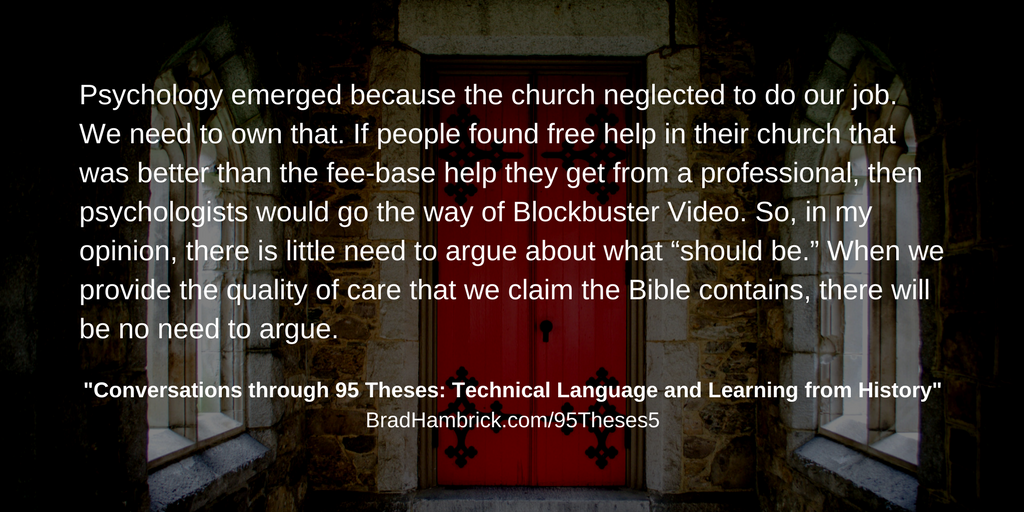 This is the fifth post in a series through the 95 Theses for an Authentically Christian Commitment to Counseling by Heath Lambert. Previous posts are indexed here (bottom of the post).

This post will examine Thesis 45, not for its construction or validity, but for its strategic wisdom and how well it takes into account the factors that have shaped the counseling profession – not just Christian counseling – over the last 150 years. If you like history, you’ll enjoy this post. If not (and I didn’t until I maried a history teacher), I think it’s still worth reading.

“Thesis 45. The Bible’s lack of technical and secular labels for counseling problems, such as those found in the Diagnostic and Statistical Manual of Mental Disorders, does not disprove Scripture’s sufficiency and authority for counseling because God uses his own, superior language to describe people’s problems (Rom 1:24-32).”

So let’s start with our history lesson. Here’s the question: “How did professional counselors – LPC’s, LMFT’s, psychiatrists, psychologists, LCSW’s, etc. – gain jurisdiction over helping people with their problems in living?” These professionals have not always been around. What did people do before them?

That is the subject of a book – which was actually a doctoral dissertation from the University of Chicago before it was a book – entitled The System of Professions by Andrew Abbott (1988). His goal was to study how various classes of professionals gained cultural jurisdiction over their current areas of expertise. One of the professions he chronicled was counseling. What did he find?

So what did we learn? In the mid-1800’s life was as Dr. Lambert’s 95 Theses prefer. People came to their pastor and to their church when they were experiencing problems in living. What happened in order to change this? Two things happened. The first was the Industrial Revolution, which moved people to major cities and tore their tenured connection with the family, community, and church.

“As traditional and local bonds unraveled, social solidarity itself came to rest on the ability of these newly free individuals to integrate personally their diverse social roles. An affiliative society depended much more heavily on the integration of the personality than did a traditional one… There is, then, clear evidence for a sudden increase in the level and importance of personal problems with life at the end of the nineteenth century. General unhappiness was a new and newly important cultural fact. (Abbott, 1988, p. 283-285)”

When people moved away from established community where they were well known, they were faced with the blessing-curse of getting to redefine themselves to an entirely new group of people with whom they had a much lower sense of commitment and bond. For a myriad of reasons, this led to a spike in emotional disruption and problems in living.

“Clergy analysis remained primitive. The gradual recognition of personal problems as legitimate categories of professional work did not bring a serious clergy effort to conceptualize them. The clergy’s failure to provide any academic foundation for their practice with personal problems ultimately proved their undoing. If another profession should establish relevant diagnostic, therapeutic, and inferential systems and legitimate these in terms of general values, the clergy’s simpleminded cultural jurisdiction would be easily usurped. In the period after 1880, another profession made precisely such a foray into the personal problem area. Working specifically with problems of unspecified chronic illness, neurologists laid the foundation of the jurisdiction that would eventually belong to the twentieth century psychotherapeutic professions. (Abbott, 1988, p. 286)”

What happened next? Psychologists came onto the scene to fill the void. However, even Andrew Abbott acknowledges they were not nearly as scientific as their role would imply, but their technical jargon and attempt to be scientific allowed them to win the day.

“The complexity of this system made neurology as much a hermeneutic as a natural science… Disciplines with specific therapies will generally defeat those with only vague therapies when results are equal. Thus the neurologists, who in fact accomplished little more for general nervousness than did the clergymen, won the day. Although they accomplished no more, they inspected and tested and argued, giving themselves at least the scientific legitimacy of observation and criticism. (Abbott, 1988, p. 289-290)”

What happened next was truly unique in history. Usually the loser of a cultural battle like this goes out of business – think about Blockbuster Video, who ceased to exist when movie rental stores were no longer needed. Psychologists won the cultural battle for problems in living, but the church remained. Actually, pastors still radically outnumbered psychologists.

“The clergy were in fact the heaviest losers from the creation of the new psychiatric jurisdiction. They had not lost in the workplace in fact, for they outnumbered the mental health professions dozens to one until after the Second World War. As late as the 1960’s, individuals with personal problems were still seeing clergymen, doctors, and even lawyers before entering the mental health system. But even by the 1920’s, the clergy had lost any vestige of cultural jurisdiction over personal problems. No longer were such problems signs of God’s word, or occasions for thinking about ultimate reality. Rather, they were complete and entire problems unto themselves. (1988, p. 308-309)”

So now the two must culturally co-exist (no bumper stickers please) and that is the tension in which we presently live.

So what is the moral of the story? Each reader can come up with their own conclusions. Here are mine.

First, psychology emerged because the church neglected to do our job. We need to own that. If people found free help in their church that was better than the fee-based help they get from a professional, then psychologists would go the way of Blockbuster Video. So, in my opinion, there is little need to argue about what “should be.” When we provide the quality of care that we claim the Bible contains, there will be no need to argue.

Second, if we so emphasize Thesis 45 that we are not skilled and conversant in the language with which problems in living are described in our day, we are likely to face the same jurisdictional fate as the pastoral counselors of the late 1800’s. We should NOT make diagnoses when we do not have the credentials to do so (that is unethical), but we should be skilled in assessment.

One of the concerns I have for us as a biblical counseling movement is that we tend to move from the presenting problem forward and focus primarily on the moral-worship dimensions of an individual’s struggle. If a counselee does not assess the starting point well, or their struggle is more mental health than problems in living or meaning of life, how trained/skilled is the average biblical counselor in making that assessment? My limitations in this area is why I am grateful for the skilled Christian psychologist and psychiatrist who can help me shepherd people well in this assessment.

Third, we should recognize that the deconstruction of well-established community is what led to the rise in the need for counseling. Our culture is not becoming less transient. This means that quality church community, where people develop meaningful and vulnerable relationships of honesty and transparency, is more needed than ever. Wherever the pendulum swings in any given decade about jurisdiction of pastor-versus-counselor (I really dislike that language, but it is the seeming context of this discussion through Dr. Lambert’s 95 Theses), the church will have a large and vital role in the care and restoration of people.