7 Lessons from Running a Half Marathon with My Youngest Son 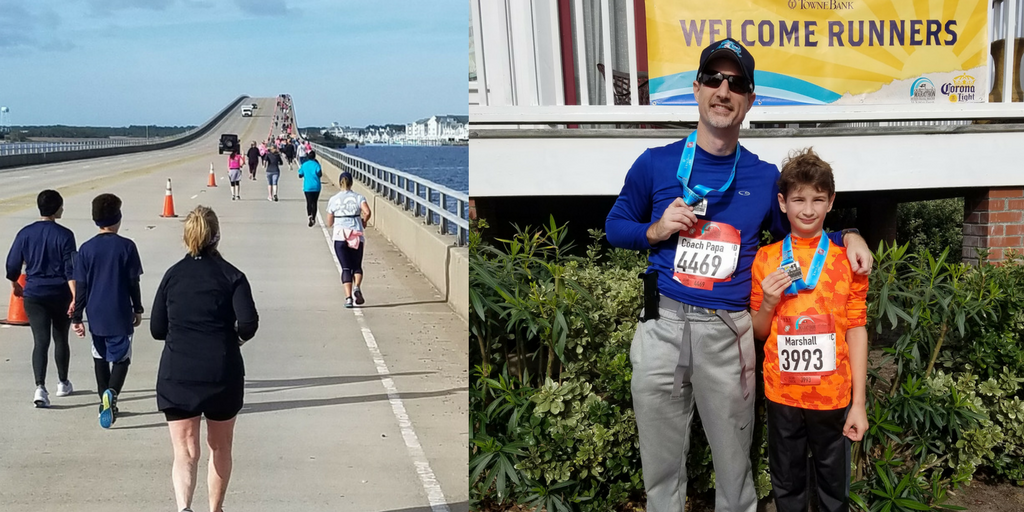 It all started when as an 8 year old 3rd grader, Marshall said, “I want us to run a marathon together before I finish high school.” I hate running. Before Marshall said these words, the farthest I had ever run was 5 miles (that was under the mandate of a baseball coach I believed to be cruel). But I love hearing my boys dream big goals. So there was no way I was saying, “No.”

At that point we had only run one 5k on a whim. Marshall loved the atmosphere of a race (bib with a microchip to track his time, starting line, fog horn, crowd, finish line, and “free” food at the end) and the sense of accomplishment. Over the next 2 years we did another 5k and then a 10k that accidentally became an 11k (“going the extra mile” was not just a cute name for the race).

By the time he was 10 years old he wanted to tackle the 13.1 miles of a half marathon. We scouted potential races (mainly looking for something flat) and had to get special approval for him to enter because of his age. We trained and set the “not disappointed goal” of finishing in 3 hours and the “really happy goal” of 2:45.

Marshall is faster than I am and has more endurance, so we set a strategy for how long he stays with me before he darts out to get his best time. We decided he would stay with me until the 11 mile mark this time, which was just after the big bridge. At that point we were on a 2:55 mile pace. When he took off I picked up my pace a bit (finishing in 2:53), never walked, and he still finished the last 2.1 miles 9:30 faster than I did (at 2:43). I love the boy’s grit and determination.

As we prepared for the race and talked about it on the way home, here are the lessons we learned.

These are the kinds of life lessons embedded in memorable experiences that I love to engage with my boys. I’m not saying that every parent needs to make their kid run long races. If they don’t enjoy running, that would be a miserable disaster. But do look for the things your kids enjoy, the challenges they’re willing to embrace, join them, and use it as an opportunity to cultivate the kind of character that will allow them to embrace with courage whatever calling God has for their life.